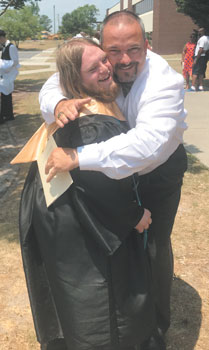 Physical education teachers do a lot more than roll out the basketballs for their students and make sure everybody is wearing the proper attire for running laps or playing volleyball.

It was partially because of his work with this group of students that led the North Carolina High School Athletic Association to single Nance out as one of the winners of this year’s Homer Thompson Memorial Award called Eight Who Make A Difference.

The award is presented annually by the NCHSAA to one person from each of the state’s eight regional districts. The winners were honored as excellent role models to student athletes through a positive and dedicated approach to coaching. Nance was nominated by Gray’s Creek athletic director and NCHSAA Board of Directors member Troy Lindsey.

The press release from the NCHSAA called Nance a special person who comes around once in a blue moon, describing him as gregarious, passionate, outspoken, humble and larger than life.

Earl Horan may have offered an even better description of Nance. Horan is a special needs teacher on the faculty at Gray’s Creek. His son, Earl “Early Bird” Horan, was one of Nance’s special needs students during his four years at the school.

Every morning during school, the two self-contained special education classes at Gray’s Creek come to the school’s atrium where Nance is on duty. “They’ll ask permission to come over there and give him a quick hug,’’ Horan said. “He goes out of his way to tell them he loves them.’’

Nance said the adaptive physical education class he teaches is easily his favorite. “It’s for kids who need a little extra help in a controlled setting,’’ he said. “We have to modify some of the games and the techniques we teach them. A lot of the kids are nonverbal.’’ He treats each child as an individual but does it in a class setting.

“They are just a pleasure to be around,’’ he said of his adaptive students. “They take everything in stride and they’re not judgmental of each other. They’re always happy to do what you ask them to do.’’

Nance coaches the Gray’s Creek baseball team and has exceptional children involved in his program as managers for the team. “Our players take our managers in as their little brothers or teammates,’’ he said. “Baseball is a kid’s game played by young men and adults, and they (the exceptional children) bring a child’s-like view to the game.’’
The managers wear baseball helmets in the dugout for safety and help with a variety of duties like sweeping out the dugout, chasing foul balls or keeping up with pitch counts. “They are so happy to be part of it,’’ Nance said. “I hope it rubs off on the players that no matter what your role is, just being part of the team, everybody is equal. You don’t have to be the superstar.’’

Nance thinks he gets as much from the experience of working with exceptional children as they do. “They bring me back to center,’’ he said. “They
relax me.’’

He thanked both his immediate family and the countless coaches he’s worked with since his youth for helping to foster his love for young people.
“I’m happy to have role models like my mother and brother and former coaches,’’ he said. “It motivates me to try and do better.’’