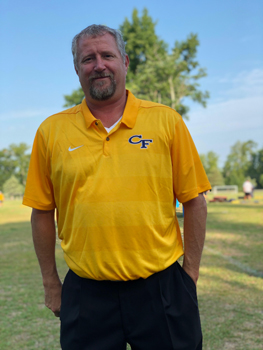 It was an early start of the official first day of football practice yesterday for Cumberland County high school teams.
Some were on the field ready to go before 7:30 a.m., while others waited a little later in the morning. Douglas Byrd and Pine Forest opted for evening practice sessions.
Here’s a  few observations from the first day.
• For years, one of the biggest complaints I’ve heard from high school football coaches is how limited they are in teaching one of the biggest parts of the game, tackling.
For safety reasons, high schools in North Carolina are limited to having body-to-body contact within the bounds of the season.
That means it’s pretty hard to teach young players the fine points of aiming their body at a moving target, wrapping it up and bringing it to the ground.
I saw an innovation at Seventy-First’s practice that provides a partial solution to the problem.
A company called Safe-Tackle has created an interesting gadget the Falcons were using at this morning’s practice. Even during the early days of official practice, players can’t wear pads or hit each other.
This gadget solves the problem. It’s a giant cushioned doughnut with a flat surface on the outside so you can stand it and roll it. A coach aims it at a player, rolls it in his direction, and the player charges, wraps up and makes the tackle.
Finally, a safe way to do this without wearing pads or breaking the rules.
• There was an interested spectator at Cape Fear’s first day of football practice, new principal Brian Edkins. Edkins replaces Lee Spruill, who stepped down near the end of last school year.
This is Edkins’ second stop as a principal in Cumberland County. He was athletic director then principal at South View High School before leaving to serve as principal at Scotland High School for a couple of years.
• E.E. Smith was the second stop on my tour of Cumberland County Schools this morning. As I left the practice, I paused for a few moments at the monument in the end zone to the late D.T. Carter. The field at Smith is named for him, and the most recent generations of Smith players who never knew Coach Carter missed a really class act.
Carter created an intramural program for E.E. Smith’s physical education classes that won him national attention.
After football wins, he used to light up those slender White Owl cigars to celebrate.
But win or lose, Carter always remained the optimist.
His favorite saying was, “The sun will come up tomorrow.’’
• Westover’s football team looked about as sharp as you can at practice, with all of the players wearing specially-made blue t-shirts with a big white W on the front.
Head coach Ernest King said it’s all part of his aim to get the Wolverines more organized and headed in the same direction.
He said this year’s Westover team is well ahead of a year ago when he was literally a last-minute hire before the season got started.
• I heard a hysterical story from my former co-worker Thomas Pope that he got from his dad Arnold, longtime local football official who also was briefly a high school coach.
There was a local junior varsity high school football coach who had an incredibly gifted athlete on his team. Unfortunately, while the athlete was blessed with awesome physical talent, the good Lord did not see fit to do the same regarding the young man’s mental faculties.
At one especially frustrating practice, the player made one mistake after another.
Finally, the exasperated coach looked at him and said, “Son, what exactly is your IQ?”
The player stood with a blank expression, then twisted his face for a moment, and said, “20-20?”
Pictured: Cape Fear Principal Brian Edkins