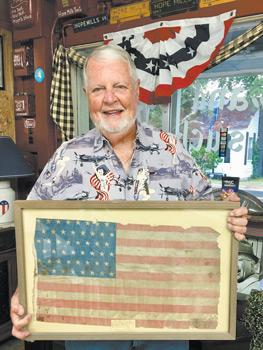 This Fourth of July, Alex Warner will display the United States flag and the POW/MIA flag outside his business, Countryside Furniture Co. on Main Street in Hope Mills.

He’ll set up chairs beneath his covered storefront so folks can sit and enjoy the annual Fourth of July parade as it traverses the roughly two-mile route from Hope Mills Middle School to Rockfish Elementary School when it begins at 10 a.m.

For Warner, a former politician who is the husband of Hope Mills Mayor Jackie Warner, the Fourth of July is filled with tradition, memories and deep respect for what the celebration means.

Warner thinks back to his youth, when Hope Mills ground to a halt for the holiday.

At midnight on July 3, Warner said, the machinery at the textile mills the town was named for would shut down and go silent. The only noise you might hear was people setting off fireworks or firing a shotgun in celebration if they didn’t have them.

The following day the whole community would gather to celebrate, something that Warner said wasn’t easy in a mill town since you always had people coming off a work shift and preparing to go on the next one.

For Warner, it wasn’t a celebration just for the sake of celebration. There was history behind it.

“We knew the history of our country, and we knew that we were celebrating the rebellion from England and the almost impossible establishment of a brand-new country,’’ Warner said. “It could not have happened without the leadership and the grace of God that created it.’’

Work benches were taken out of the mills and set up for people to come and sit and enjoy food that people brought and shared. The folks from Merita Bread donated loaves to make all manner of sandwiches, but peanut butter and jelly was always a big hit.

Lemonade was served from huge wooden tubs. Warner said he can still remember how sweet it tasted.

Elderly veterans were in attendance, proudly wearing old military uniforms that in some cases were becoming threadbare from age.

For a vantage point to watch all the things that were going on, Warner said he and some of his young friends scouted out a huge acorn tree. They used a fence near the mill to climb up and get to the lowest branch, and from there they had ringside seats to all the action.

There was plenty of music, mostly singing of patriotic and religious favorites, accompanied by guitar, banjo and maybe a flute.

There was a watermelon seed spitting contest, a three-legged race and softball games, sometimes between mill villages, and sometimes the kids played.

It was a day of pure fun. The only real danger of getting hurt, Warner said, was stepping barefoot on a lit cigarette butt or a hill of red ants, so everybody watched where they were walking.

Warner said the celebration in Hope Mills was timed so everyone could travel to Fayetteville for the parade there. “I remember Uncle Sam would show up on stilts 10 feet tall,’’ Warner said.

In his store today, Warner has a framed American flag he got from Charlie Biggs that was flown at the end of World War I on Nov. 11, 1918, and the Fourth of July every year after that.

“Today, the small towns have preserved much of that,’’ Warner said. “We were appreciative of the freedom and liberty given us by our forefathers. It was a day of appreciating our country, a great day of excitement and unity among our people.’’

In Hope Mills this Fourth of July, it still is.

After the parade, activities will move to Municipal Park near Town Hall on Rockfish Road. There will be a horseshoe tournament at 4 p.m., a cornhole tournament at 4:30 p.m. and a frozen T-shirt contest at 5 p.m. The object is to take a T-shirt that has been frozen, try to thaw it out and put it on over your clothes.

The official welcome will be at 6 p.m., followed by performances by two bands, Eastline and Rivermist. Both play beach and country music along with hits from the ’80s and ’90s.

The day will conclude with fireworks at 9:15 p.m.

PHOTO: Alex Warner displays an American flag that was flown at the end of World War I on Nov. 11, 1918.