Ballad of the Green Beret: Intrigue and a Chance to Meet the Author 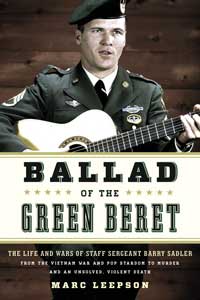 The year was 1966. The Righteous Brothers, The Four Tops, The Monkees and The Mamas and The Papas were all in the Billboard Top 10. The No. 1 spot for five weeks, though, was held by a special forces soldier who had taken a punji stick to the knee in Vietnam. It was Staff Sgt. Barry Sadler’s “The Ballad of the Green Berets.”

The song sold 9 million records. Sadler earned more than $500,000 in royalties in 1966 from the song. Later, Sadler would say the song was the worst thing that ever happened to him.

Historian, journalist and author Marc Leepson captures Sadler’s triumphs and misadventures in his recently-published book Ballad of the Green Beret: The Life and Wars of Staff Sergeant Barry Sadler, from the Vietnam War and Pop Stardom to Murder and an Unsolved, Violent Death. On Sunday, May 7, City Center Gallery and Books will host a book signing and author presentation for Leepson.

When Leepson decided to write about Sadler, he had some general knowledge of the green beret. “I knew about the song, and I knew about Sadler and that he was involved in some mercenary stuff. I discovered a lot of what people don’t know,” said Leepson. “I interviewed 71 people, most all of them knew him and many of them trained or served with him. I found people he grew up with, a guy he was in the Air Force and Army with and in Vietnam. They told me a lot of stuff.”

There was stuff about the guy Sadler killed in Nashville in 1978 and how Sadler got away with it. “There are three chapters in the book about it,” said Leepson. “The detective from the case was very cooperative. Barry’s mug shot is in the book.”

After serving in the Army, Sadler’s dream was to become a recording artist, screenwriter and actor. While he did score some bit parts in a few western series on TV, his dreams of fame and fortune as a performer and musician never came to fruition. He was broke and in debt by 1973. Sadler did write 29 pulp fiction novels, though. All but seven of them were part of the Casca: The Eternal Mercenary series. While the books sold well, Sadler never recovered financially. That didn’t keep Sadler down; he moved to Guatemala where he claimed to train Contras. While there, he was shot in the head, kidnapped and more. Leepson covers it all.

“This is the first biography of Barry Sadler and he has a local connection. He lived in Fayetteville. He trained at Fort Bragg and was assigned there. The song is the unofficial theme song of the special forces,” said Leepson. “It is still played today. I don’t think anyone knows how it came to be. I tell that story in detail. It involved a public affairs lieutenant, a general and Barry. He went viral before anyone knew the word internet.”

While this is Leepson’s ninth book, he is no stranger to Fayetteville. He spoke about his book Lafayette: Idealist General during a Lafayette Birthday Celebration weekend in recent years. Leepson has also written about Francis Scott Key, the Civil War, the history of the American flag and Monticello. On May 7, guests who attend the book signing will have a chance to ask Leepson questions and hear him speak. His presentation begins at 2:30 p.m. Books will be available for purchase. Find out more about City Center Gallery and books at www.citycentergallery.com. Find out more about Marc Leepson at www.marcleepson.com.