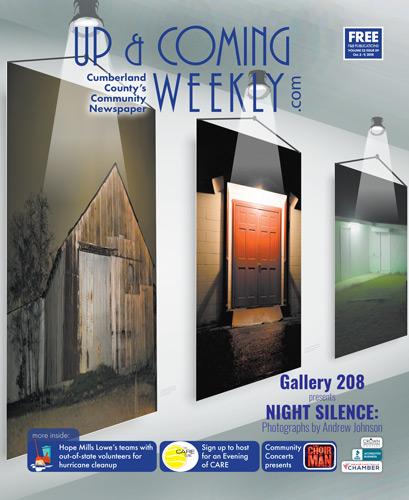 Gallery 208 has hosted many solo exhibitions by photographers during the last several years. Each artist brings a theme to their work – capturing the beauty of the landscape, a stopped action moment or an unreal circumstance crafted by the use of Photoshop or Light Room. From purist photogra­phers to those who use photographic software, each artist brings an intent. Tuesday, Oct. 9, from 5:30-7 p.m., Gallery 208 will host a reception for photographer Andrew Johnson. The exhibition, “Night Silence: Photographs by Andrew Johnson,” is a masterful group of photographs by an artist who uses the existing light at night to create an alternate reality.

The public is invited to the reception to meet the artist, hear a brief artist talk and preview a body of work that is unique. Johnson’s photographs lure viewers into looking more closely at something familiar, like a building or a set of doors in the urban or rural landscape. We recognize a familiar subject, but it is as if we are seeing something unfamiliar. The beauty of the light in the photographs contrasts with the conceptual – familiar versus unfamiliar – and we are fixed in a moment of discovery. As in all great works of art, the image succeeds in representing what it does not represent. In other words, the artist is able to transcend the limits of a photograph.

Johnson is a minimalist. He is not copying what he sees, but he uses photography to transcend a subject – to create an illusion beyond itself. He has crafted a physical presence as well as a story that goes beyond the subject. For me, Johnson distills his experiences in image-making to evoke a new order – one that is distinguished by an illuminating, colored light.

As viewers, we each bring our sensibilities to the work. Yet Johnson talks about his work from a differ­ent perspective. He shared the following: “For me, shooting at night is a singular experience. It’s not an aloneness. It’s at night, of course, and no one (is) around. But it’s more than that, it’s as if no one else is on Earth and I am consumed by artificial light and the sounds of nature at night. I feel comfort in the absorption of a night environment.”

He continued, “You don’t usually think about it this way, but light at night can actually create crisp images when the light reacts with different surfac­es, creating dramatic effects. I am drawn to these surfaces, the stillness of the night and surreal effects of artificial light to create a mood.”

Shane Booth, a professional photographer, is familiar with Johnson’s work, since Johnson was an art student at Fayetteville State University. “Andrew’s works are very complicated,” Booth said. “We, the public, are not used to looking at the world at night and so we don’t pay attention to the ways in which light effects things or places. On the other hand, Andrew is drawn to the light at night. He sees what we do not see. He is drawn to the different temperatures of light rays at night. He captures those temperatures to add a sense of mystery to his content.”

Booth continued, “Technically, artificial light has the potential to flatten out objects. In Andrew’s case, the light flattens out a doorway, so it becomes a new way of viewing a doorway. As well, artificial light, particularly at night, can mute colors and turn an or­dinary place into a surreal environment. So, Andrew uses this to add emotion to an inanimate object ... like a building; he is giving the building a personality by his use of light. As well, he is creating a forebod­ing sense of place by contrasting a dark atmosphere with artificial light.

“Andrews’s photos are void of people, yet he creates a supernatural presence. In looking at the photos, you may feel as if there is always someone behind you, or behind the door in the photo. In some ways, the artist has created a moment when the viewers become vo­yeuristic; we are not supposed to be at that location, at that time of the night. It’s uncanny. At the same time, tension is mixed with beauty and stillness, and we are memorized to stare at the photo.”

Photography is a popular medium for untrained artists, especially since cell phone and “selfie” imag­es are easy to produce. In some circles, photography is still underrated when compared to painting or sculpture. But in the hands of an exceptional artist, the photograph becomes the quintessential medium to bring meaning and content to viewers.

The above is best said in John Berger’s well-known book, “Ways of Seeing.” The author states, “unlike any other visual image, a photograph is not a rendering, an imitation or an interpretation of its subject, but actually a trace of it. No painting or drawing, however naturalist, belongs to its subject in the way that a photograph does.”

Gallery 208 is excited to introduce this talented lo­cal veteran artist to the community. Johnson served in the U.S. Army for six years before he attended and graduated from Fayetteville State University. After graduation in 2017, he became employed by the city of Fayetteville as its graphic production supervisor.

Gallery 208 invites everyone to attend the reception to meet the artist. But, if that’s not possible, “Night Silence” will be on exhibit until late December.