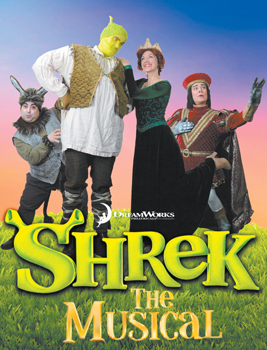 January in Fayetteville can be a fun and busy time with community activities. This week locals can play in the snow at Segra Stadium, catch a Marksmen game at the Crown, or watch Oscar contenders at the Cameo. For adventure seekers who want to step into a fairy tale and tag along with a hero and his trusty steed to rescue a princess, well, the Cape Fear Regional Theatre has just the thing. “Shrek: The Musical” opens at CFRT Jan. 23 and brings with it lavish set pieces and costumes, local and national talent and enough song and dance to make the Times Square New Year’s Eve Party look weak.

Based on the Oscar-winning animated film, the musical is a Tony Award winning feat of its own. Creating fairy tale misfits and fire-breathing dragons in animation is fun to watch, but CFRT is presenting them right on stage in the ‘Ville. The technical team has been working behind the scenes to make sure local audiences are thrilled with the results, said CFRT Artistic Director Mary Kate Burke.

Truckloads of set pieces and costumes were rented and brought in for the show, Burke said, but CFRT technical crew regulars finished up set and costume work to make “Shrek” a “visual feast” for local audiences.

With the truckloads brought in behind the scenes, 19 songs, 31 cast members and one flying dragon, “It’s an ogre-size show in every sense of the word,” Director Tiffany Green said.

The characters you love (or don’t) from the movie will be onstage: Shrek, Donkey, Princess Fiona and Lord Farquaad. Not to worry if you haven’t seen (or don’t remember) details from the movie. Burke said audiences will have no trouble following the story.

Ogre Shrek and his sidekick, Donkey set off on a quest to rescue the beautiful Princess Fiona, who is guarded by a love-sick dragon. The vertically challenged Lord Farquaad wants to marry Fiona and become king. There will be some trouble, some romance, a secret revealed, big laughs and a lot of singing and dancing.

The show is appropriate for all ages and presents themes that resonate with humans and fairy tale creatures alike, Green said.

“It is about love, acceptance, tolerance and joy,” Green said. “It is about putting light out into the world. It’s really a show for everyone.”

“Shrek: The Musical” has music by Jeanine Tesori. The book and lyrics are by David Lindsay-Abaire. The show is choreographed by Sebastiani Romagnolo and music is directed by David Maglione.

“Shrek: The Musica”l runs Jan. 23 until Feb.16. CFRT has scheduled several special events during the show’s run. You can also treat your little ogre to a VIP Experience after matinee showings in February. For more information on special events or to purchase tickets, visit cfrt.org or call 910-323-4233.

PJ Party, Jan. 23 and Feb.7 The perfect excuse to wear your pajamas in public and enjoy a pre-show popcorn bar and friendship bracelet making.
Opening Night Dance Party, Jan. 25 following the performance. Join the cast, creative team and CFRT staff for an opening night dance party and reception.
Military Appreciation Night Jan. 29 All military personnel receive a 25% discount on tickets with valid ID.
Swamp Soiree, Jan. 30 Preshow games and activities that are perfect for all the fairy tale creatures in the audience.
Teacher Appreciation Night, Jan. 31 All educators receive a 25% discount on tickets with valid ID.
Ogre and Princess Party, Feb. 1 Dress as your favorite ogre, princess or fairytale creature. Decorate your own crown and color pictures before the show.
Sensory Friendly Performance, Feb. 2 Lighting and sound effects are decreased and there is a “safe zone” with sensory experiences and tactile objects for anyone to use.
Galentines’s Day, Feb. 13 Enjoy a mimosa bar with your best girlfriends.