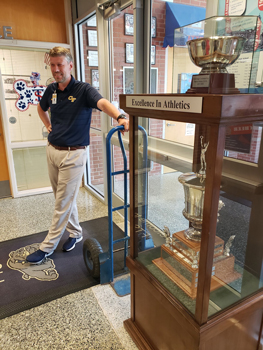 For the second time in three years, Cape Fear High School has won the Patriot Athletic Conference Maxwell/Wells Fargo Cup for overall athletic excellence. The Colts took the cup back from last year’s winner, Terry Sanford, which finished second in this year’s chase for the honor.

The award is based on points awarded to each school for order of finish in official conference sports.

The Colts used a strong finish in the spring sports season to wrap up the trophy. They shared the regular-season title in softball with Gray’s Creek and won boys golf while placing second in boys tennis and boys track. The Colts took third in baseball. Other championships won by Cape Fear this season were volleyball, girls golf, wrestling and boys and girls swimming.

Terry Sanford’s other championships this year were in boys soccer and girls tennis.

The Trojans didn’t win any championships in the spring but took second in girls track, boys golf and girls soccer.

Other conference titles for the year were won by South View in boys and girls cross country and boys and girls track. E.E. Smith won girls basketball. Cape Fear and Gray’s Creek shared the conference regular-season title in softball.