If the early turnout is any indication, Mark Kahlenberg should not have a problem keeping a full team on the field this summer for the Hope Mills Boosters American Legion baseball program.

At the first official practice of the season last week, Kahlenberg had a potential roster with 23 names of players from area high schools who were either on hand at the first workout or had expressed interest in playing this year.

Even with the good turnout, Kahlenberg expects this year’s team to be somewhat young, with a number of players who will be getting their first taste of the American Legion brand of baseball. The roster is heavy with a big crop of players from Cape Fear. Gray’s Creek High School has returned to the mix, along with players from South View and Douglas Byrd.

Before it’s all over, Kahlenberg hopes to pick up some players from Freedom Christian and Terry Sanford. The Bulldogs were still involved in the state 3-A baseball playoffs when the Boosters American Legion season kicked off last Sunday with a doubleheader against Jacksonville Post 265.

“Last year we were struggling to put nine guys together around tournament time,’’ Kahlenberg said. “At our first meeting (this year), we had 14 guys, and I knew there were 10 other guys who couldn’t make it.’’

Among the players Kahlenberg will be counting on are pitcher Landen Harris from Gray’s Creek, who’s committed to play at the University of North Carolina at Pembroke. Another prospect is Aaron Smith, Harris’ Gray’s Creek teammate, who batted in the No. 3 position for the Bears this season.

South View prospects include Riley Caudle, who recently committed to play for Methodist University. Another promising player is Cape Fear’s Nick West, who played shortstop and pitched and could fill an important need for Kahlenberg in the heart of the lineup.

Kahlenberg doesn’t feel the team has an established pitching ace as the season begins and will have to rely on pitching by committee until things get more settled. “Hopefully we can develop those pitchers into a starting rotation,’’ he said.

Both Harris and Caudle are optimistic about this team’s chances this summer.

“I like playing with my friends from all over Cumberland County,’’ Harris said. “I think we can do pretty good if we bring it all together, hit the ball and play the game how we learned it.’’ Harris also hopes to use the Legion experience to work on his off-speed pitches and improve his velocity.

Caudle is looking forward to facing better pitching this summer, improving how he sees the curveball and working on improving his ability to hit to the backside. “We have a lot more people than last year,’’ he said. “A lot of them are going to college, so they’ll focus on Legion ball.’’

The Boosters will again play their home games at South View High School.

Following is this year’s schedule. Whiteville currently does not have a team this year, but Kahlenberg said he had seen reports on social media that the Whiteville club was attempting to get funding so it could possibly return this year. For now, its games have been removed from the schedule.

EDITOR'S NOTE: Due to some late changes in the Hope Mills Boosters 2019 schedule, portions of the version in this week's print edition are incorrect. The correct schedule appears below. 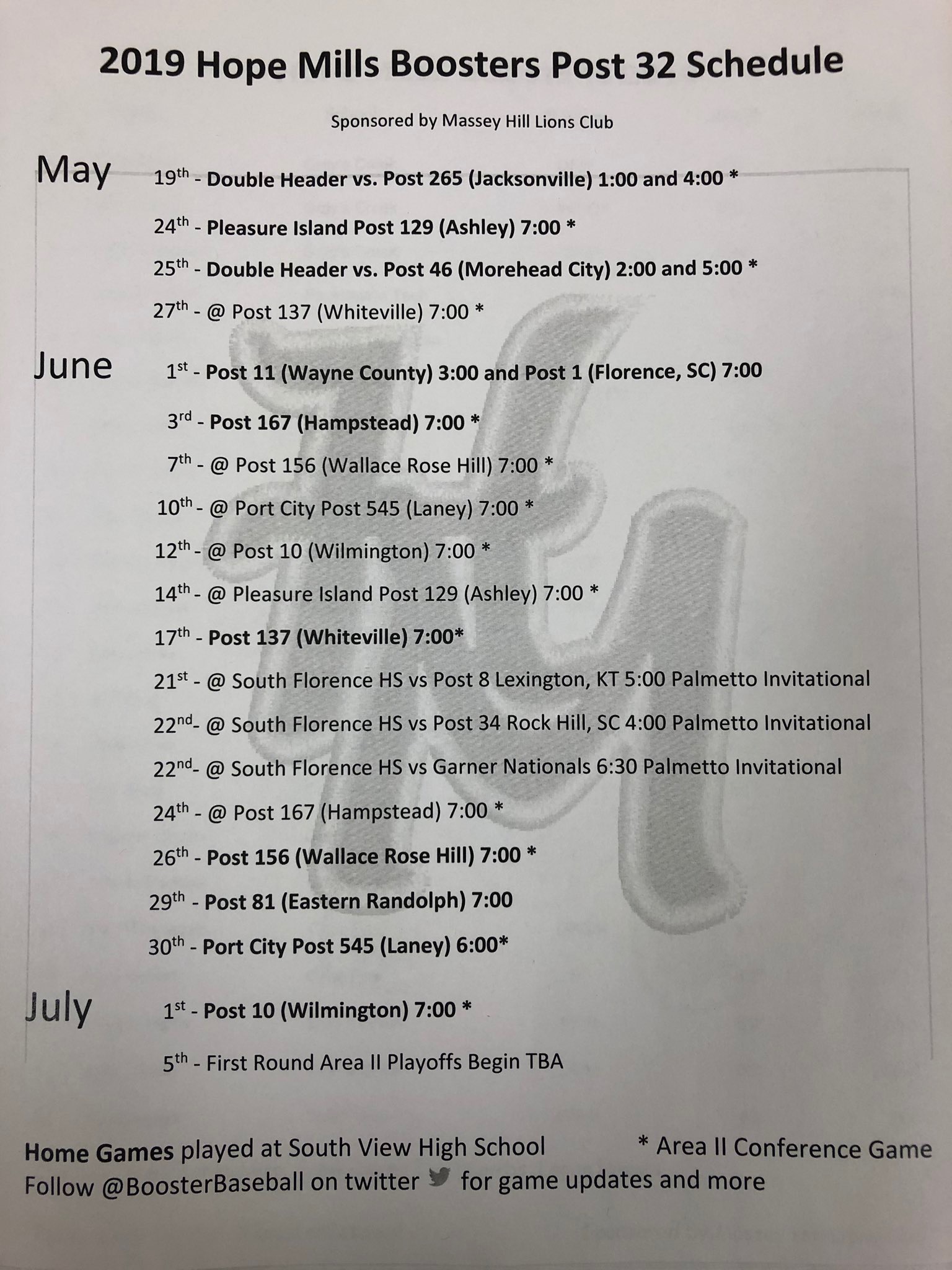