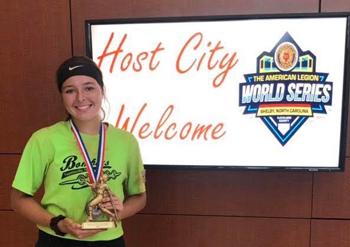 Stan Bagley knew his Cumberland Post 32 Bombers had no shortage of talent this season, but even he was surprised by the way the team coasted through the rest of the field at this year’s North Carolina American Legion Lady Fastpitch state tournament in Shelby.

Cumberland, in its first season of American Legion softball field, cruised through the double elimination event with a 3-0 record and outscored the rest of the field 30-10 en route to the title. They finished the season with an 18-2 record.

“I was a little shocked that we hit the ball as 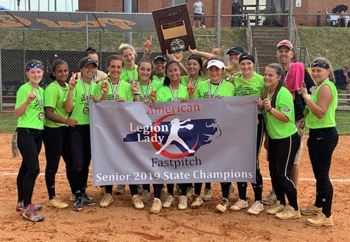 well as we did late,’’ Bagley said. “In all three games, seeing those pitchers the second and third time, they really zoned in and showed me what they were capable of doing.

“I knew they had the potential. Just to watch it click when we needed it was awesome.’’

Among the leading hitters for Cumberland in the three games in the state finals were McKenzie Mason with a .727 average, Alyssa Norton .556, Alexa Glemaker .500 and Courtney Cygan .455.

Bagley credited the top of the Cumberland order — Jaden Pone, Cygan and Mason, for setting the table with their speed and putting the ball in play.

In the championship game, he praised Ashton Fields for sparking a huge rally that put the win away for Cumberland.

Most Valuable Player honors for the tournament went to Glemaker for her pitching, mostly in a relief role. She came on in the championship game after Cumberland fell behind early and pitched scoreless relief as the Bombers rallied for the win.

In 11.1 innings for the tournament, Glemaker recorded seven strikeouts, allowed no walks and just one earned run.

“All year long,  when we needed that relief off the bench she stepped up and came through,’’ Bagley said of Glemaker. “It seemed like she knew the pressure was on and she pitched better for us.’’

Glemaker, a freshman, will enroll at Cape Fear High School this fall.

“I know some people thought we weren’t going to be as good because we were a first-year team,’’ Glemaker said. “Watching some of the other teams,
I thought we had a good shot.’’

If no one else in Cumberland County decides to field an American Legion softball team next year, Bagley could potentially return everyone on this year’s team for the 2020 season. If another team is formed, a decision will have to be made on how the county schools will divide the players between them.

Bagley said with the success of this year’s entry, he expects Legion softball to continue growing around the state.

“The ultimate goal is to have one team in every county in North Carolina, then grow this thing in the Southeast and eventually the whole nation,’’ he said.