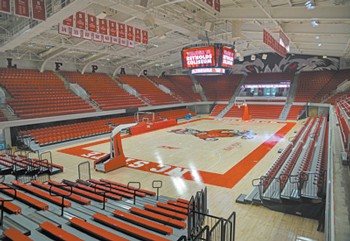 The late United States Senator Bobby Kennedy made a speech in the 1960s that popularized what some claim is an ancient Chinese curse, although the real source of the phrase has been disputed over the years.

The words Kennedy used were, “May you live in interesting times.’’

Regardless of where the phrase came from, it certainly applies to the current situation in state and local high school athletics resulting from fears over the continuing spread of the novel coronavirus, or COVID-19 as it’s officially known.

Over what seemed like a matter of hours, concerns over the spread of the virus led to some sweeping decisions at the state level that left the high school sports world, locally and statewide, at a standstill.

The organization initially decided to restrict access to its state basketball championship games at North Carolina State’s Reynolds Coliseum and North Carolina’s Dean Smith Center to official team personnel and a small group of parents from the competing schools.

Then they followed that with word that the championships had been postponed, with no guarantee they would even be played.

Of course, this leaves the boys from Westover and the girls from E.E. Smith, who had qualified for the state 3-A basketball championship games at Reynolds this year, in limbo waiting to find out if they would ever get to fulfill every high school athlete’s dream of chasing a state title.

More bad news from the NCHSAA followed. The entire spring sports season was suspended effective at 11:59 p.m. on Friday, March 13. The ruling stated that not only competition would cease, but so would any workouts, practice or skill development sessions.

The North Carolina Independent Schools Athletic Association followed suit shortly after that, announcing the suspension of all interscholastic games, scrimmages or contests on the same date as the NCHSAA. The NCISAA did leave the option of holding practices at the discretion of its member coaches.

I am not a doctor. I don’t pretend to understand everything that’s been written and spoken about the coronavirus. But one thing I have heard loud and clear is that it’s critical to stop the spread of what I’ve seen described as a disease with a lot of unknowns that there is currently no vaccine for nor any medication that has been truly effective at knocking it out.

I respect the frustration of coaches in Cumberland County, where as of this writing there are no reported cases of the virus, as they try to understand why their teams can’t play.

All I can say is this decision to close schools is much like when there’s a forecast of snow. Sometimes, the forecast is wrong, but officials have to make a decision based on what’s best for everyone’s safety. That is what is happening here, only the stakes are far higher than having a car skid into a ditch and get stuck.

I am confident we will get through this, as long as we all take common sense precautions and do everything we can to prevent the disease from spreading. At the same time, let’s not spread rumors. Listen to the professionals and stay safe.