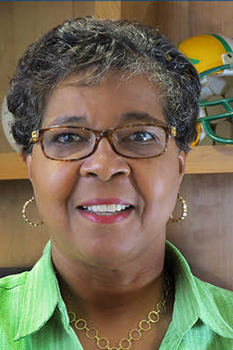 Facing some of the most challenging decisions the North Carolina High School Athletic Association has ever had to cope with, Commissioner Que Tucker stressed a positive attitude moving forward as she spoke to statewide media recently about her organization’s reaction to the pandemic caused by COVID-19.

Despite that upbeat mood, the initial announcements from the NCHSAA office in Chapel Hill were grim for coaches, athletes and high school sports fans.

Tucker was forced to announce that the state high school basketball championships, which saw Fayetteville’s Westover boys and E.E. Smith girls advance to the state 3-A finals, were postponed indefinitely.

The entire spring sports season was also put on hold, as were all practices and off-season skill development sessions until at least Monday,
April 6.

However, Tucker stressed the April 6 date was flexible and that her staff and members of the NCHSAA Board of Directors would continue to assess the situation in hopes it might be possible to play both the basketball championships and as much of the spring sports season as possible.

Tucker said the NCHSAA will study the calendar in hopes the situation with COVID-19 improves and see how much of a spring season with championships can be played.
She said that the spring season will not be extended into the summer months if play can resume in time because playing that late would conflict with graduation exercises and commitments some students may have with college camps.

If the spring season can be played, Tucker said the NCHSAA would have to work with conferences on coming up with some kind of formula to determine conference champions since all of the games likely could not be played in the time available.

She suggested they might use a percentage of conference games won, which is how conference standings are determined. She added the MaxPreps national and state rankings, which are used to seed NCHSAA playoff sports, may not be used in this situation.

As for the basketball championship games, if they are played there are many variables to deal with.

One would be allowing the teams that qualified for the finals sufficient time to practice and get into shape before playing the games if they can be scheduled. Another problem could be finding venues to play them. Reynolds Coliseum at N.C. State and the Smith Center at the University of North Carolina were supposed to host the championships.
If those arenas aren’t available, Tucker said the NCHSAA would first turn to other college venues then look at civic arenas.

It is possible if the games aren’t played that the NCHSAA could declare cochampions or do something it did in football years ago and have Eastern and Western champs with no outright state winner.

“I always like to lean toward the positive,’’ Tucker said. “I’m going to be hopeful and prayerful that by the time we get to April 6, as we get closer and closer, this situation will be different and maybe we will have some opportunity to look at resuming spring sports.’’