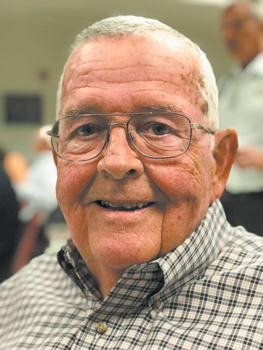 The Fayetteville Sports Club has announced its Hall of Fame class for 2020.

The new list of inductees includes four voted into the traditional Hall of Fame and two added as members of the Legends category, which was introduced for the first time last year to honor candidates who had been considered for some time but had not been inducted.

Here are brief biographies of each honoree.

A 1965 graduate of Fayetteville High School, Buie has been involved in various levels of officiating since 1967. He was a baseball umpire for the North Carolina High School Athletic Association from 1967-98. He umpired five high school state championship series.

He has won a number of awards from the NCHSAA including the Golden Whistle Award, the highest award given to officials, along with the Special Person Award and the Distinguished Service Award.

Better known by his nickname "Porky," Edwards was one of the most successful dirt-track racers in North and South Carolina.

He began his career in the lower levels of both dirt and asphalt racing in 1975, then advanced to the popular Late Model division in 1976. Edwards claimed more than a dozen track titles and took his 400th career win in July of 2007 at the Fayetteville Motor Speedway.

Grooms-Garrett was one of the most versatile and outstanding athletes in the history of South View High School.

Her senior year with the Tigers, she was the athlete of the year in three different sports, volleyball, basketball and softball.

She enrolled at UNC-Pembroke and continued her athletic success there, becoming the only player in school history to be named an NAIA All-American in the sport of volleyball.

Grooms-Garrett also played softball for the Braves and was All-Carolinas Conference from 1991-92 and All-District her senior year.

She returned to UNC-Pembroke to serve as head coach of the volleyball and softball teams.
She coached softball for two years, nearly tripling the school’s win total from the first season in her final year as softball coach.

She was inducted into the UNC-Pembroke Hall of Fame in 2003.

During his stint as head basketball coach at E.E. Smith, McNeill compiled a record of 185-62. He coached from 1993-1999 and earned one Holiday Classic championship, two conference titles and three sectional championships.
Those are impressive numbers considering he inherited a team his first year that went 4-22 in the previous season.

Sexton was a football standout at Terry Sanford High School before going on to star on the football team at Elon University.

He earned All-American recognition at Elon in 1974 and was elected into the Elon Sports Hall of Fame in 1985.

Sexton was drafted by the Pittsburgh Steelers in 1975 and played three seasons with the organization, winning a Super Bowl ring in 1975 when the Steelers defeated the Dallas Cowboys in Super Bowl X by a score of 21-17.
Sexton was the third-highest player drafted in Elon history, taken in the fifth round. The only players who went higher were Rich McGeorge, a first-round choice of the Green Bay Packers in 1970 and Jimmy Smith, who was taken in the fourth round by the Washington Redskins in 1984.

Sexton set an Elon record in 1971 when he intercepted five passes in one game vs. Gardner-Webb.

Spicer, a native of Richmond, Va., and a longtime Fayetteville resident after his baseball career was over, was among a trio of players drafted by the old Philadelphia Athletics before they relocated to Kansas City.
During his high school days he played on a two-time state championship basketball in Newport News, Va. He later played semi-pro football in the Dixie League.

Spicer made appearances with teams in Lumberton, Fayetteville, Macon and Springfield before spending a number of seasons in the Pacific Coast League with Los Angeles. His best pitch was a screwball, complemented by a knuckleball and a slider.

One of his teammates in Los Angeles was the actor Chuck Connors of "The Rifleman" fame.

In 1958, he won the Rawlings Silver Glove Award for his fielding.

Spicer was also a successful billiards player who competed against legends like Willie Mosconi and Rudolf Wanderone Jr., better known as Minnesota Fats. In golf he was a one handicapper.