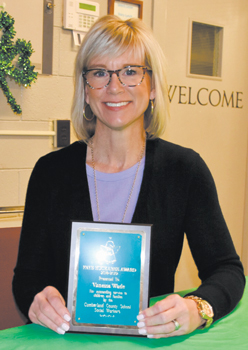 The first thing Vanessa Wade says about her job as a social worker at Gray’s Creek High School is there’s no such thing as a typical day.

“I can start at 8:30 and think I’ve got all day to get this done,’’ she said. “By noon, all of that has gone out of the window. Every day is completely different.’’

Yet in the face of that kind of challenge, Wade is apparently doing her job well. Evidence of that fact came last month when she was named the social worker of the year by Cumberland County Schools.

It could be her early life as a self-described Army brat that helps her deal with the variety of situations she has to work with. She lived all over the world, she said, moving about 18 times before landing in Fayetteville in 1994 and spending 14 years with the Department of Social Services.

In 2008, she got the call to come to work as the social worker at Gray’s Creek High School, and that’s where she’s been ever since.

For those who don’t know exactly what a school social worker does, Wade described it as being like the parent a child doesn’t have. If they do have parents, then she’s the aunt or uncle.

One of Wade’s biggest battles is trying to help students overcome the barriers that prevent them from regular school attendance.

This includes a host of issues, such as making sure the students are getting food and have clean clothes to wear.

Much of Wade’s job is done on school grounds so she can have regular contact with the students who are in the greatest need. But she also makes regular home visits to deliver food and check on the living conditions of the students under her charge.

She said she sees barriers to students getting the education they need that are different from those faced 20 or 30 years ago.

She finds many children are forced to become independent quickly because they lack needed support at home. “I think the teenagers need their parents more than ever,’’ Wade said.

Despite facing a lot of challenging situations in her work, Wade said she tries to remain as positive as possible when working with young people. “Even though I’m having a rough day, they don’t need to know that,’’ she said.

She feels she’s reached a level of peace and is able to provide better service to her students.

Wade never went into social work for personal glory, but she calls the award from the county an incredible honor, and she’s proud to be part of a team that extends beyond the walls of Gray’s Creek High School to help the area’s youth.

“We have an incredible faith-based community in Gray’s Creek that allows us to be more creative,’’ she said.

She praised Rev. Scott McCosh, pastor at nearby Mount Pisgah Baptist Church, for helping with a variety of services and outreach for young people.

Wade said if someone gave her control over the purse strings, she’d like to see the schools offer more hands-on training in skills for those young people who aren’t going to enter the military or enroll in college. “For some kids, it’s not in their family culture or mindset, but they will go on to be great kids doing hands-on skills,’’ she said.

Wade thanked the staff and administration at Gray’s Creek, her husband, her parents and her son for helping her do the best job she can.

“I tell my kids every day, I don’t have a job without you,’’ she said. “I tell them they are never bothering me, and they smile.’’