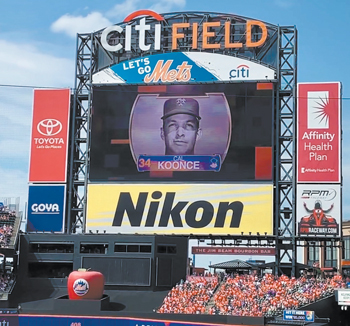 This fall will mark the 50th anniversary of the victory of the "Amazin'" New York Mets over a talented Baltimore Orioles team in the World Series. A veteran bullpen pitcher from Hope Mills named Calvin Koonce played a key role in that title, winning six games down the stretch for the Mets and earning seven saves.

Late last month, friends and family of Koonce, who died in 1993 at the age of 52, traveled back to New York to take part in a 50th anniversary celebration held at the Mets’ current home stadium, CitiField.

Peggy Koonce, wife of the late Mets reliever, had a hard time believing it’s been 50 years. It was shortly after her husband’s death that she attended the 25th anniversary reunion.

Many of the former Mets stars have since died, players like Tommie Agee, Don Cardwell, Don Clendenon and manager Gil Hodges.

Hall of Famer Tom Seaver, the biggest pitching star for the 1969 Mets, was also absent. His family recently announced he is no longer making public appearances as he’s suffering from dementia.

One of Koonce’s closest friends on the team, Hall of Famer Nolan Ryan, was unable to attend the 50th anniversary. Mrs. Koonce said her husband was a mentor to the younger Ryan, helping the flamethrower deal with control issues taming his lethal fastball. Ryan ended his career with the most no-hitters in major league history: seven.

The Mets treated the Koonces and the other families there for the 50th anniversary weekend firstclass, putting them up at the Plaza Athenee, which has hosted guests like actress Elizabeth Taylor and Princess Diana.

The ceremony held before New York’s Saturday, June 29, game with the Atlanta Braves took about 30 minutes. The deceased Mets were introduced first, with their pictures individually flashed on the giant video screen, followed by a live camera shot of the family member or members there representing them.

The living players were driven via golf cart to a platform in the infield. Lifetime Met Ed Kranepool spoke on behalf of the entire group.

“It was bittersweet because the health of so many of them has failed,’’ Mrs. Koonce said.

But the memories of the victory over the Orioles were still fond ones for her. “I think the thing that was so important was knowing we were playing the Orioles and they were so good,’’ she said. “We were a team not chosen to win it. We were holding our own, and the young pitchers were doing their job.

“When you’ve got Nolan Ryan and Tom Seaver and Jerry Koosman and a bullpen consisting of Calvin and Ron Taylor and all those guys, it looks pretty good.’’

Mrs. Koonce said she felt pretty special just sitting in the stands for that World Series, looking around and seeing the late Jacqueline Kennedy just a couple of rows behind her, and the entertainer Pearl Bailey not far away.

“Just seeing the look on Calvin’s face after it was all over,’’ she said. “It was just wonderful. The expressions of love they had for each other.’’

Also along for the 50th anniversary observance was Timmy Smith, who played baseball for Koonce when Koonce was first head coach at South View High School and later at Campbell University.

“Most anybody you talked with about Mr. Koonce talked about how he was a positive influence (on his teammates) and took them under his wing,’’ Smith said.

Smith added that Koonce had a similar effect on him. “He was like my second father,’’ Smith said. “He could tell you more by not saying things than he could with words. Just his looks and his motions.

“One player told me (Koonce) sold him a couple of sport coats, took him under his wing and took care of him and his reputation. Another person said it was great to have (Koonce) there to talk with because he could have made a lot of wrong choices along the way. Mr. Koonce helped

him make the right ones.’’