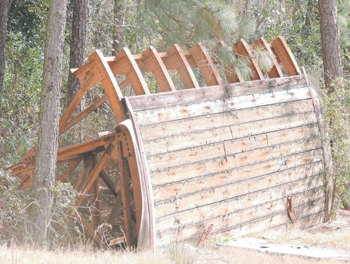 Citizen input is crucial as the town of Hope Mills rolls out initial plans for the proposed Heritage Park. The meeting to get public input will be held Thursday, Sept. 26, at
6 p.m. at the Hope Mills Parks and Recreation Building

The park is to be constructed on land near the current dam and stretch down to property where the former Episcopal Church is located.

The preliminary goal is to create a natural green space with hiking trails while also adding kiosks that will tell the story of the area near the dam. Ancient dam gates from years past, which are standing near the proposed entry to the park, will also be put on permanent display.

Hope Mills town manager Melissa Adams said the town is using the same process it did to get input from citizens on what to do with the golf course property the town owns.

along with the public.’’

Adams said the purpose of the meeting is to gather information on what the public and the various committees would like to see in Heritage Park.

There is a tentative plan for the park that was drawn up by people from North Carolina State.

It calls for a green space with trails, kiosks with educational signage and the old dam gates. The goal is to connect the property entrance area on Lakeview Road with the Episcopal Church property on Main Street.

The only difference between this meeting and the one involving plans for the golf course is there won’t be as many options to discuss with Heritage Park because it’s a much smaller space.

Adams said the golf course has many more amenities over its some 90 acres while Heritage Park only takes up six or seven acres. “We can’t cram but so much in there,’’ Adams said.

One thing that has been discussed is some kind of picnic area at Heritage Park, Adams said.

She added that the trails designed for Heritage Park would not be a flat walking surface like the walk near town hall but are hilly and natural.

“It’s extremely important for the public to come and give their input and take a look at everything,’’ Adams said. “This is just the beginning stages of it.

“We’d like very much for as many people to come as possible.’’

For questions prior to the meeting, Adams said people should contact Lamarco Morrison at
910-424-4555.

Picture 2: An entry way to the proposed Heritage Park