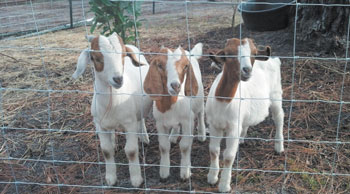 The popular Gallberry Corn Maze is back for a sixth season of weekend fun for families, with a special added attraction this year.

“We are doing pig racing,’’ said Jeanette McLean, spokesperson for the corn maze.

They try to get in at least two pig races during Friday’s hours for the corn maze and as many as three or four during their longer hours on Saturday.

The pigs have their own track at the corn maze, the Gallberry Nas-Hawg Speedway.

The pigs are Gloucestershire old spots and were originally bred as orchard pigs. “They are actually leaner, longer pigs and aren’t messy,’’ McLean said. “They don’t root as much as a farm pig does.’’ 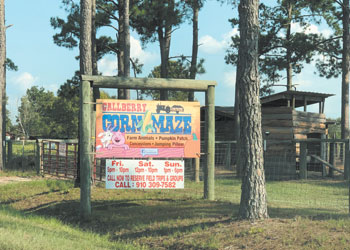 pig of their choice to win.

In addition to the racing pigs, Galberry continues with many of its traditional attractions that have made the corn maze a fall hit.

There is the jumping pillow along with a wide assortment of farm animals. They include Hee Haw the Donkey, baby goats and baby peacocks, Tom Tom the Turkey and rabbits.

Other attractions include a giant corn shack with 6,000 pounds of corn, various slides, a climbing wall, cornhole games, tic tac toe played with Styrofoam pumpkins, a barrel train and a hayride.

Of course, the main attractions are the two mazes, a one-acre children’s maze and the five-acre main maze. McLean estimates it takes about 45 minutes to walk through both mazes.

Flashlights are required in the maze after dark. They are available for sale at the concession stand but McLean said most customers use the light on their cellphones.

Tickets are $11 for everyone ages 3-65. Children under three are free. Cumberland County school teachers, seniors 66 and over and military can get a $1 discount with proper identification.

The hay ride stops at dusk for safety reasons.

All sales are cash only and there is an ATM at the main ticket gate.

The only thing a ticket doesn’t include is the popular air cannons which are three shots for $1.

Pumpkins and all food from the concession stand cost extra.