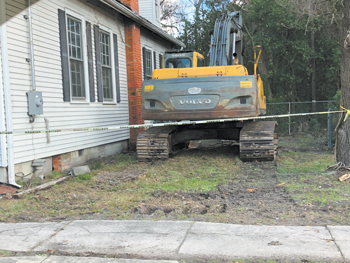 Editor's note: When the following article was written, the Parish House had not yet been torn down. The house was demolished on Jan. 28.

Hope Mills Mayor pro tem Kenjuana McCray and commissioner Pat Edwards are both weary of a group of town citizens who continue to point fingers and complain about plans to demolish the Parish House donated to the town by the former Christ Episcopal Church.

Both agree that now that the current board has twice voted to have the building torn down, it’s long past time for the town to move forward on multiple projects that will preserve the true history of the mill village.

McCray noted that many of those who support saving the Parish House were members of the Hope Mills Historical Preservation Commission. Multiple members of that organization either resigned or did not re-apply to remain on the commission after the last election when McCray was elected and both Edwards and Mayor Jackie Warner were reelected.

“This is the same group of people that said they wanted nothing to do with the town,’’ McCray said.

She also noted some members of the commission who have stepped down are in possession of property that was donated to the town for use in the proposed town museum. “I have not heard any follow-through about them returning any of those items,’’ McCray said.

McCray said if she had been a member of the commission, she would not have stepped down simply because of one point of disagreement with elected town officials.
“There is a whole lot of historical preservation we can do,’’ McCray said.

McCray added she does not understand the full reasons why committee members stepped down or didn’t re-apply, but she does read a lot into the conduct of the former members of the commission and the way they have treated her and other members of the current Board of Commissioners since the election last November.

“I’m going off their behavior, the things they have done since I was elected,’’ McCray said. “As far as being cyber bullied or harassed for a decision I made, it does not make me listen to you anymore.’’

McCray noted she was initially receptive to overtures made by former commission members to the board when a representative of Preservation North Carolina was invited to Hope Mills to tour the Parish House and speak to the board about possible options for saving it.
“We do preserve history,’’ McCray said. “We are saving the (Christ Episcopal) church. We have a town museum. We are investing in our history.’’
McCray thinks many people in Hope Mills are misinformed about what those who support saving it repeatedly refer to as the historic Parish House, citing that it is listed on the National Registry of Historic Places.
In fact, the building itself is not on the list of historic buildings that are located in the downtown historic district. McCray has researched the subject and found the building’s real history to be suspect.
“I challenge the historical value of the building,’’ McCray said. “It was rebuilt in 1985. It has burned multiple times. Most people don’t know there’s termite damage. There’s mold. All these things have to be repaired.’’
McCray noted that the church, which will be saved and is next door to the Parish House, and the proposed Heritage Park on the adjacent property are in desperate need of parking. The land where the Parish House is presently located  provides that space once it is demolished.
“You’re going to have this beautiful church and Heritage Park and you’re not going to have proper parking,’’ she said, if the Parish House was allowed to remain.
As for those who argue to save the building, McCray said she has not heard any concrete plans from them on what they want to do with the building if it was restored or how they plan to raise the money that would be needed to restore it. Base figures suggest it could cost at least six figures to make the building stable. Hope Mills commissioner Bryan Marley, a veteran firefighter, said if a thorough inspection of the building was ever done, it wouldn’t be an exaggeration to suggest the figure to fully restore the building could reach $500,000.
McCray said this is the third Board of Commissioners that’s wrestled with the Parish House dilemma. She feels it’s time to move forward. “There are a lot of other projects we can work on,’’ she said. “I think if the community rallies around to make those projects successful, that’s the best way to move forward.’’
Commissioner Edwards said the heart of the debate over the Parish House has nothing to do with history. She thinks it all stems from personal animosity many of the members who stepped down from the preservation commission have toward Mayor Warner.
“If our mayor was not Jackie Warner and did the very same things she’s doing now, they wouldn’t be going through all of this,’’ Edwards said.
“She wants what’s best for the town and they can’t see that,’’ Edwards said, noting that the previous board which frequently voted 4-1 against anything Warner supported had two years and a consistent voting majority on the board to deal with the Parish House and did nothing.
“Now they are coming back at us because we want to demolish it, and we had planned to do that back in 2016,’’ Edwards said.
Edwards said the current board has made its plans for a positive future for Hope Mills clear, and hopes the citizens will be supportive. “There are so many possibilities, if we could get turned loose and start on it,’’ she said.