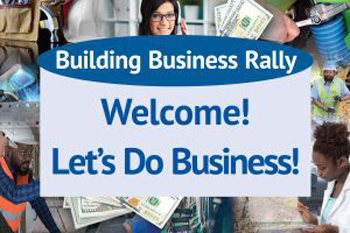 The town of Hope Mills is open for business and moving forward with new energy.

That was the message Chancer McLaughlin and other representatives from the town had to share recently when they attended the Building Business Rally at the Ramada Plaza in Fayetteville.

The purpose of the rally was to connect contractors and vendors with organizations that have projects in planning and money to spend on them.

McLaughlin, who is the planning and economic development director for the town, said Hope Mills currently has about $37 million worth of projects scheduled over the next five years.

The Building Business Rally gave contractors in Fayetteville and the surrounding area a chance to connect with the Hope Mills town staff at the rally.

McLaughlin said the town receives bid from companies located around the state and from states like South Carolina or even Florida. While the town is looking for the best bid, McLaughlin said it wants to make sure some of those bids are coming from area businesses.

“We would like to engage the local businesses and local contractors to come take advantage of these opportunities,’’ McLaughlin said. “We are saying these projects are here.’’

The rally wasn’t just about big construction projects, like the estimated $16.5 million public safety building for the police and fire departments that the town plans to begin work on this year.
Smaller projects are also involved. At last year’s rally, Hope Mills connected with a company that installed water coolers in town offices.

“We realized we didn’t have any (coolers) in the offices at the governmental complex,’’ McLaughlin said. “That ended up being a contract for the police station, fire station, town hall, parks and recreation and public works.’’

McLaughlin said smaller contracts can cover everything from janitorial services to landscaping to catering to providing security at construction sites.
The people at the event who were officially representing Hope Mills were McLaughlin, public works director Don Sisko and deputy public works director Bruce Clark.
Also attending to support the town staff who were on hand but not involved in direct negotiations with any of the contractors at the event were Mayor Jackie Warner and Commissioner Jessie Bellflowers.
McLaughlin said he’s already seeing positive results from attending the rally.

“I’m getting emails right now,’’ he said. Those sending the emails include businesses that want to get on the Hope Mills list of vendors along with organizations that want to learn more about business opportunities available in Hope Mills.

In addition to the public safety building, McLaughlin said the town has a number of other significant  projects that attracted attention. The list of big ticket items that the town will be looking at in the coming years includes the long-proposed development of Heritage Park, which after the public safety building is the most expensive endeavor under consideration. There are also smaller projects involving the public works department as well as the stormwater department.

McLaughlin said the public safety building and the development of Heritage Park appear to be the two items on the list that are closest to having work actually start as soon as this year. Also on the drawing board is completion of a new town museum.

The town remains open to engaging local contractors anyway it can, McLaughlin said. “We want to increase our bidding opportunity with local contractors,’’ he said. “We do think that’s important. That helps to stimulate the economy, growing the local businesses.’’

He thanked the various organizers of the Building Business Rally, including PWC and NCWorks. Other sponsors were the Greater Fayetteville Chamber, the Fayetteville State University Construction Resource Office and the Small Business Development and Technology Center.
McLaughlin said he’s always anxious to hear from any local businesses that want to do business with the town.
He welcomes phone calls from all interested parties. He can be reached during regular business hours at 910-426-4103. McLaughlin’s email address is cmclaughlin@townofhopemills.com.