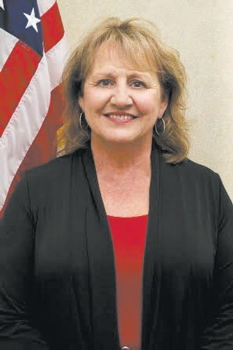 Hope Mills Mayor Jackie Warner said the town remains open for business for the most part, but like everyone else, she is adjusting to the safety restrictions put in place statewide and nationwide in response to the COVID-19 pandemic.

All official town commission and committee meetings have been canceled through April 6, including the next scheduled meeting of the Board of Commissioners. Essential personnel of the town remain on duty at Town Hall and the police, fire and pubic works departments, but with some limitations to prevent direct interaction with too many people.

Except for the front door, Town Hall is closed, and when people enter the building, they will interact with town staff from behind a glass enclosure.

The front office is open at the police department for people who have to go inside.

One of Warner’s biggest concerns during the pandemic is the large number of local restaurants that are closed to everything but takeout service to prevent the spread of COVID-19. She’s particularly concerned for restaurants that traditionally don’t do takeout service, adding she’s noted a serious decline in their business even though they are advertising that they’re open for takeout only.

“The lights are on but I see very few cars,’’ she said, referring to one such business. She noted some businesses are trying to stay viable by using social media to advertise they are open. The problem, she thinks, is many Hope Mills residents don’t have access to social media for whatever reason.

One local concern is that, initially, too many people were congregating at Hope Mills Lake when the shutdown for COVID-19 first began. Warner said there are still a lot of people going to the lake, and she is hopeful most of them are observing social distancing. The one popular business located on lake property, Big T’s, has barred customers from using the picnic tables beneath its shelter and is now allowing customers to come and order but not stay on the grounds.

Warner hopes the community will continue to support charitable causes locally that benefit the area’s disadvantaged, especially the elderly and school children, the latter having lost access to school lunches since all schools are closed for the foreseeable future.

She is especially concerned about ongoing donations to the ALMS HOUSE in Hope Mills, which supports a program that provides regular lunches for children in need of food.

“The people that make donations to them aren’t in church,’’ Warner said. “They are also missing the churches that collect at the church and take it to the ALMS HOUSE.’’
Warner also expressed concern for senior citizens who are in local retirement and assisted living facilities who are currently denied visitors because of the lockdown.
“You need to take stuff to the door and drop it off,’’ she said.

Warner said the biggest item on the town agenda moving forward is preparation of the budget for the new fiscal year. It would normally be presented to the community in early June.

Work is continuing on the budget, she said, with some members of town staff involved able to work from home. She said the town may need to figure a way it can present the budget to the community either by a live Facebook feed or by recording the meeting as usual and posting it online as soon as possible.

Warner said citizens can keep up with the most current info at the town website, www.townofhopemills.com, the Facebook page at Town of Hope Mills Administration or by calling Town Hall at 910-424-4555.