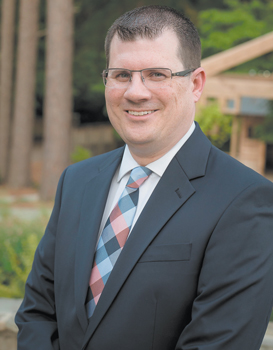 Like ministers across the country, Pastor Wesley Holmes of the Hope Mills Church of God has been making major adjustments in how he relates to his congregation as everyone copes with the challenges presented by the COVID-19 quarantine. But in  many ways, Holmes thinks the situation has pulled church members even closer and helped increase the sharing of the message of the faith.

Once it became clear that traditional church operations were going to have to be drastically curtailed, Holmes divided up the names in his church’s directory and shared them with a handful of families in the congregation. Each family was asked to stay in regular contact with the members on the list they were given.

The church also has a phone tree, typical with many congregations, that allows Holmes to spread messages with everyone. Holmes said the leaders of his denomination have stressed since the start of the pandemic, the more contact with the membership, the better.

Initially, Holmes was doing his Sunday worship service live on Facebook, but he soon encountered a problem. The internet speed his church was using was not adequate enough for the task. Too many people were trying to log into the live feed and Holmes and his videocast kept getting bumped offline.

Since then, he’s decided to tape his services in advance. He does a weekly Bible study on Wednesdays that he uploads the same day as the study. The Sunday morning worship service is normally uploaded on Saturday night.

Facebook controls allow him to schedule the time on Sunday morning when the worship service will become available for public viewing.

He’s kept the services fairly simple, usually doing them from the sanctuary at the church. He takes care of the majority of the service, with his wife Heather contributing the children’s message. His teen-age son Isaiah is off camera handling the music and sound for the broadcasts each week.

“It is a challenge,’’ Holmes said. “Talking with other ministers, they are having to step out of their comfort zones.’’

Some churches don’t have the live streaming capability that Holmes does, so he’s heard of other congregations that are doing drive-in church in the parking lot, keeping their members sequestered in their cars with windows rolled up, which the minister broadcasts the sound of the outdoor service over their FM radios in the car.

Holmes said there have been positives to the live streaming church sessions. “They can share it with their families that don’t go to church,’’ Holmes said. “We’re getting a lot of people we don’t minister to regularly on a Sunday morning.’’

People are also able to watch the Sunday service over and over during the week when it’s posted on Facebook. The only major downside Holmes sees to the video services is people might have distractions in the home setting versus the typical peaceful scene Sunday morning in the sanctuary.

Like many pastors, Holmes said his sermons in the initial days of quarantine have focused on positive, uplifting themes trying to help people deal with the situation. But he plans to move forward from that in the coming days and share more about the major themes of the Gospel message.

“I truly believe we can still get the message across, even though we are not gathered in the sanctuary,’’ he said. “We have to continue getting the message out.’’

There have been isolated reports of ministers in some congregations refusing to honor the quarantine and holding large meetings of their members. Holmes doesn’t agree with that practice, especially because of the number of elderly members in his congregation. “We don’t want to do anything that may cause them to get sick,’’ he said. “I want to be part of the solution and not part of the problem.

“I’d rather scale back and not have services for several weeks than to try and have services, say we are going to do it no matter what, and some people get sick.’’

In some ways, Holmes feels what is happening now is a return to the church as depicted in the second chapter of the book of Acts.

“A lot of people were having to do church at home,’’ he said of the stories from Acts. “I think it’s brought the church back to its roots.’’