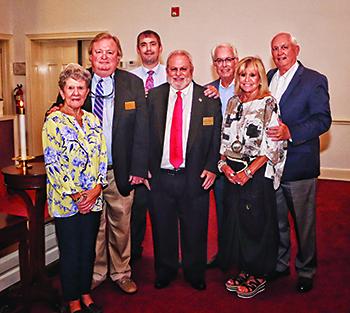 On a recent Monday morning, about 50 people gathered at the Rogers & Breece Funeral Home Chapel on Ramsey Street. Many were some of Cumberland County's most well-known politicians. Regardless of political affiliations, they co-mingled, fist bumped, back slapped and spoke in hushed, amiable tones.

“I just felt something needed to be done [to recognize them],” he said. “They have done an exceptional job serving this community. They've brought it up to another level.”

That something was to publicly recognize the Breece family for their dedicated service. He started by writing a letter to state Rep. Diane Wheatley, telling her of the funeral home's history and service to the community.
He also surprised the family by having a recognition program. He convinced them they needed to have a staff meeting that morning. It wasn't until they each arrived and saw the gathering that they realized something was happening.

In 1898, the United States fought a 112-day war with Spain, annexed Puerto Rico, and J.M. Rogers established and operated the Fayetteville funeral home. In 1926, Oscar P. Breece bought into the business. Rogers died in 1932 and his partner Breece bought the remaining business from Roger's widow, Florence.

In 1950, Robert W. “Bobby” Breece, Sr. graduated from college and joined the business. After his passing in December 2006, sons Corey and Robert took over. Corey is president, Robert is vice president, and sister Sharman Breece Craven serves as the company's secretary.

A Passion For Serving

Among the speakers at the appreciation ceremony was Fayetteville Mayor Mitch Colvin, who also owns a family-operated funeral home. He said his family has been in the funeral home business only about half the time compared to Rogers & Breece. Colvin said the Breece family “truly must have a passion” to serve their community and has been in business for 124 years.

Cumberland County Board of Commissioners Chairman Glenn Adams represented the county. But he said he also came as a friend. “I grew up with Corey Breece, we played sports against each other,” Adams said.
Adams said the 124 years Rogers & Breece has provided funeral services is a testament to the family's hard work ethic. Like Colvin, Adams presented a proclamation honoring the family.
Wheatley referred to the Breece family as friends. She gave the most emotional testimony.

Wheatley presented Robert and Corey each with a North Carolina State flag that had flown over the state legislative building. “It's a little thing I can do for you on behalf of the delegation,” she said.
Sen. Kirk deViere was among the local legislative delegation attending the program.

There Was Never Any Doubt

There was never any doubt that Corey Breece Sr. would follow his father and grandfather into the funeral business.

“I never had any other thoughts. I worked there when I was 14 and 15 years old, mowing grass and digging graves,” Corey Breece said.

When he turned 16 and got his driver's license, Corey said his father would have him drive the limousine. Then he attended Fayetteville Technical Community College and got his funeral director's license.
Corey said to be successful in the business, you have to be willing to work. He works 26 days a month, 12 on and two off.

“It takes someone willing to work all the time, this is a 365-day a year business,” he said. “I've missed birthdays and [sons’] ballgames.” But he loves his profession. “I want to leave a successful legacy business for my family,” he said.

The funeral home employs about 20 people, including Corey's two sons: David and Corey Jr.
David is the general manager, responsible for most operations conducted by the funeral home. Corey Jr. handles outside maintenance, making sure the facilities are in good order and the Rogers & Breece Funeral Home landscaping looks immaculate.

As vice president, brother Robert Breece is the Senior Funeral Director. He works with family members who have lost a loved one, something Corey says he does very well.
But Robert wasn't sure about joining the family business right away after graduating from Central Carolina Community College. Robert said he loved sports, anything sports. He wanted to be a coach, a sports announcer, or even a recruiter.

But as family members operating the business got older, Robert felt the family needed him a little more.

“My family means more to me than anything,” he said.

He earned his funeral license at FTCC and followed his brother into the family business. He believes whole-heartedly in the family’s business motto: “Our family serving your family.”

“I tell everyone on our staff, it ain’t about us, it’s all about the family [of the deceased],” he said. “We are blessed with a very good staff.”

Robert believes everyone can become better; by providing more services to families at their most vulnerable time.
To become better, and take the business to another level, there must be changes and everyone must be on board. “Everybody on the same page with the same mission.”

Robert's son, Will, is also involved. His job takes him to the family-owned cemetery — Fayetteville Memorial Cemetery — on US 301.
His son and his nephews are the fourth generation who will lead the business in the future.

“We need the young heads, but they’ll need us old heads too. They can learn from us,” he said.