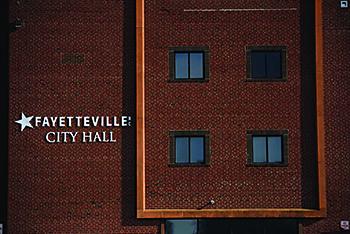 After a petition was issued in June to change how municipal districts are organized, a referendum might be on November’s ballot to restructure the nine-person Fayetteville City Council.
The proposal comes less than a year from the last time the city decided on voting districts for City Council members.

Currently, one member is selected from and represents each of the nine city districts.

According to city documents, the proposal calls for Fayetteville’s municipal districts to be reduced to five. That would result in five representatives from five separate districts within the city. The remaining four would be decided at-large, meaning all Fayetteville voters would decide on nearly half of the members of the city council.

North Carolina law requires that at-large members of any city or town council in the state be fewer or equal to half of the total elected municipal body, according to legal analysis from the UNC School of Government.

If voters approve, redistricting ahead

If the petition is validated, the measure is placed on November’s ballot and if a majority of voters approve of the restructuring, Fayetteville City Council members would be responsible for passing a new district map, like any other municipality in North Carolina.

Under the equal protection clause of the U.S. Constitution, the potential new five districts would be required to be substantially equal in population.
At a regular meeting earlier this month, council members considered the petition for approving the measure to be put on the ballot for the upcoming election in November, but the City Council delayed the approval.

City Attorney Karen McDonald said at the meeting that the council must decide on the ballot measure at its next meeting on Aug. 22 or hold a special meeting to conclude the matter.
The timing is required because of the public notice to voters that must be issued by the Cumberland County Board of Elections in a certain time frame before the election, as required by state law. Per state law, any proposed change to voting districts must have enough public notice prior to a vote.

Neither McDonald nor members of the council discussed the petition’s origin.

According to N.C. General Statute § 160A-104, municipalities of Fayetteville’s size only need 5,000 valid signatures on a petition to ask for a change to the structure of the City Council. U.S. census figures show that Fayetteville had an estimated 209,000 residents in 2021.

The Cumberland County Board of Elections is charged with validating the petition. According to a letter addressed to the city and signed by the board’s interim director, Angie Amaro, 5,009 of the 5,721 signatures on the petition have been verified, certifying the validity of the petition on June 13.

Upon direction from the City Council at last week’s meeting, McDonald will follow up with the Board of Elections on the petition’s validity and ask for a copy of the filed notice of the circulation of the petition.
State law requires that such a notice must be registered with the county board of elections for the petition to be valid.

The City Council will review the notice once it is obtained from the Board of Election, at its Aug. 22 meeting or a special meeting.
If the petition is ultimately deemed valid, the City Council will be required by state law to send the proposal to voters.

Then, if voters ultimately reject the proposal, the current district map will be used for the next decade until the next U.S. census recalculates the city’s population in 2030.