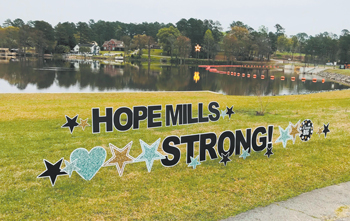 Families are a big deal in a small town like Hope Mills, and it was family ties that were behind the recent display of a sign at Hope Mills Lake aimed at boosting town morale.
Valerie Reed who, with her husband Matthew, operates a sign business called Sign Gypsies, was behind the actual posting of the sign near the lake that featured the words "HOPE MILLS STRONG."

Reed said the inspiration for the sign came from her in-laws, Cylinda and Jerry Hair, both longtime residents deeply involved in the town.

Reed said the Hairs contacted her about putting up some kind of greeting that would offer an inspirational message to the town’s citizens.

It was right in line with the kind of work Reed, who primarily works as an occupational therapist in the public schools, is geared to do. She and her husband bought the local franchise for Sign Gypsies last November. Since then, they’ve done a variety of signs for various occasions, including birthdays, anniversaries, retirements, welcome home, baby greetings and sports accomplishments.

Reed and her husband, both South View High School graduates, moved back to the town six years ago feel and feel a strong attachment to it.

“We have tons of friends who are small business owners,’’ she said. “We understand what a detriment  (COVID-19) can be, and we wanted to do something to brighten everyone’s spirits.’’

Even though Hope Mills is much bigger than it was during Reed’s South View days, she said there is still a lot of camaraderie and hometown spirit in the community. “We know people here have faced hard times before,’’ she said. “We hope (the sign) will provide strength and make people think we are in this together.’’

Reed said she first reached out to Hope Mills mayor, Jackie Warner, with the idea of putting the sign at Hope Mills Lake, an idea Warner was readily supportive of doing.
“It’s just something to show support and let people know we can get through this,’’ Warner said.

When Warner first thought of where to put the sign, she was thinking of a long-term location. But Reed’s signs are designed to be 24-hour rentals under normal circumstances. Since it was going to be in a central location at the lake, it was decided to take it down after dark to avoid someone coming back after hours and removing some of the letters or other decorative parts of the display.

Reed said she would be willing to put the sign back up from time to time since Warner said the response to it first being displayed was so tremendously popular.

In addition to the sign, the town has decided to temporarily turn on the lighted star that’s on the far bank of the lake and is normally only used during the Christmas season.
Warner said the star is on a timer, and will come on at dusk each day and shut off at dawn.

Warner compared it to the lights being used to illuminate the interior of the Thomas Campbell Oakman Memorial Chapel on South Main Street.

Warner feels the lights at the church and the light of the star help illustrate the town is pulling together for the good of everyone. She feels both are signs of hope and love.
“There’s life there,’’ she said. “They are all ways of showing we’re committed, we care and we’re tied together.

“They work together for the good of all.’’