Max Abbott Reaches Out to Ailing Student and Family 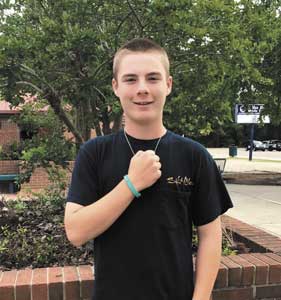 Barnes Smith and Reese Walker, seventh-grade classmates at Max Abbott Middle School, have known each other since kindergarten. When Smith learned his longtime friend had been diagnosed with a rare form of bone cancer called Ewings Sarcoma, he wanted to do more than just send her get well wishes.

“He came to me and asked if they could do something for Reese,’’ said Max Abbott principal Carla Crenshaw.

Beyond being friends, Walker and Smith are also athletes, Walker playing volleyball and Smith baseball at Max Abbott. So, the idea of Runs for Reese was born.

“It was a sponsorship for every run they scored,’’ Crenshaw said. “It really motivated our kids, and they ended up winning the conference championship this year. They dedicated that to her as well.’’

The Runs for Reese campaign raised over $600 which was presented to Walker’s family to help offset the expense of her treatment.

In addition to raising the money, Smith also wears a special green bracelet as a tribute to Walker and her fight against cancer.

“The treatments are intense. I just wanted her to get through it, and with us behind her, I felt like she can do it.’’

Crenshaw thinks it’s likely if Walker is still undergoing treatment when school resumes in the fall, her eighth-grade classmates will continue to try and help her. “We’ve talked about a couple of different things,’’ Crenshaw said. “She is a big part of their class.”

Westover High School will need to do a quick turnaround to replace head football coach Stephen Roberson. Roberson, who guided the Wolverines to a share of the Cape Fear Valley 3-A Conference title last fall, is leaving to become head coach at C.A. Johnson High School in South Carolina.

Roberson takes over a program that was 1-9 last season and hasn’t fielded a winning team since 2009.

Westover will be starting summer workouts soon and needs a head coach in place as quickly as possible to maintain continuity.