Britt softball players finally put a ring on it 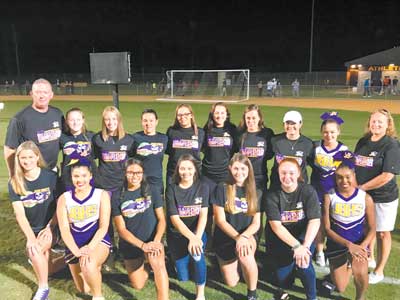 It wasn’t the easiest challenge to accomplish, but a little over a week ago, Jack Britt’s softball team got its biggest recognition for winning the North Carolina High School Athletic Association 4-A softball title as the players and coaches were presented championship rings by the school.

The ceremony took place at halftime of Britt’s second home football game of the season against Terry Sanford.

Jack Britt athletic director Michael Lindsay said the toughest thing about raising the money to give the players rings was the timing of the championship.

“Literally a week after we won the championship, school was out,’’ Lindsay said. “We didn’t have the day-to-day contact with the parents, kids or community. Teachers and staff were gone. We had a tough time reaching out to the community.’’

When the money was raised and the rings were finally secured, the next problem was scheduling the ceremony at a convenient time so all the players could be there. That wasn’t a problem for the underclassmen, but for the seniors who’d left to go to school, there were some issues.

One of the biggest challenges involved Savannah Roddey, who had already traveled to the West Coast where she was in the process of moving to Clackamas Community College in Oregon to play softball.

“Her mother said early on if we gave them plenty of notice when the date was, she would try to get back,’’ Lindsay said. Roddey was able to make it.

In addition to making the ring presentation to the girls, special recognition was given to Jane Britt, the wife of the late Dr. Jack Britt, whom the school is named for. Dr. Britt passed away last December.

“Since the building opened, she and Dr. Britt have been huge supporters of Jack Britt High School,’’ Lindsay said. “We felt it was most appropriate to honor her.’’

Lindsay said it was also a fitting tribute for the whole team, which really hadn’t gotten to celebrate much in front of their peers because the championship came right at the time school was closing for the year.

“This was an appropriate way to start the school year off and remind everyone what Jack Britt softball did in June,’’ he said.

For her part, Buccaneer softball coach Sebrina Wilson just enjoyed seeing the girls get their rings. “It put the icing on the cake for the season and the accomplishment they achieved,’’ Wilson said.

She also thanked Debbie Jones of Hope Mills Plaza Florist. When the team arrived at Jack Britt after winning the state title in June, Jones was in the parking lot to hand out flowers to the players. She showed up at the ring ceremony to do it again.

“Everybody was trying to make it extra special,’’ Wilson said. “(The players) were super happy for what they got.’’

Wilson said she’s been asked multiple times if being state champion has sunk in for her. She admitted she’s not sure it ever will.

“As a coach, you work so hard and want your kids to do so well,’’ she said. “I just wanted to sit back and watch their faces when they opened the boxes (and) see the smiles and surprise on their faces. It’s a moment not very many have and that they’ll remember the rest of their lives.’’

Meanwhile, the celebration of the title is about to end as Wilson and the returners from last year’s team start work on the 2019 season.

There will be a team meeting this week, then Wilson will check the eligibility of all her players before starting off-season practice.

“We’re going through fundamental things,’’ she said. “It’s what we did last year. When the season gets here, we focus on the bigger picture.’’

The Buccaneers won’t have any problem setting goals for next year. While they won the state championship, they suffered three losses to Richmond Senior, which wound up as the Sandhills Athletic Conference champion, but was eliminated from the state playoffs by the same South Caldwell team that the Buccaneers beat in three games for the state title.

Wilson is hopeful the fact her team peaked at season’s end may help prevent opposing teams from putting a big target on their back.

“I think there are so many other teams that have so much more hype,’’ she said. “We went under the radar most of the reason. I’d rather relish that role than have the spotlight on us.’’

As for chances of repeating as state champion, Wilson doesn’t want to look that far ahead. “We’ve got to play within ourselves,’’ she said.