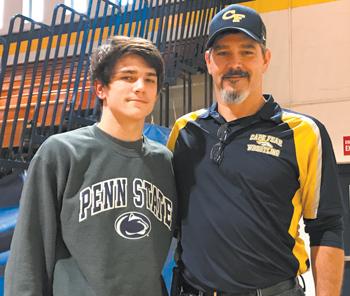 Editor’s note: This story was written prior to the completion of the third and fourth rounds of the North Carolina High School Athletic Association dual team wrestling playoffs. On Thursday, Jan. 31, Cape Fear defeated Gray’s Creek and West Carteret to advance to the 3-A state championship against St. Stephens High School Saturday, Feb. 2, at the Greensboro Coliseum Fieldhouse. Jack Britt was eliminated by Wilmington Laney in the third round of the 4-A playoffs on Thursday.

The worrying season has arrived for Heath Wilson and high school wrestling coaches like him.

Wilson heads the highly successful wrestling program at Cape Fear High School. This is the time of year when he’s concerned most of all about accurately timing the peak performance of his wrestlers as they begin the quest for team and individual honors in the different levels of state competition.

As outlined in the Editor’s Note above, Cape Fear recently advanced victorious in its battle in the North Carolina High School Athletic Association’s dual team championships.

Cape Fear was among the top contenders for the 3-A title, and Wilson freely admits that’s been a focus of his for some time, to bring another state wrestling title to Cape Fear.

The school’s only team wrestling championship was won back in 1984, before the dual team playoffs were created. Wrestling was an unclassified sport at that time. Mike Stanbridge led Cape Fear to a championship in the state tournament in Winston- Salem, even though the Colts didn’t crown a single individual champion in that tournament.

These days, there are technically dual team and individual state tournament state champions, although the NCHSAA recognizes the dual team winner as the team champion. But the leading team in points in the state individual tournament can also claim bragging rights — plus it’s the only shot for individual wrestlers to achieve personal glory.

That’s why Wilson is so concerned about when his wrestlers will peak.

“That’s always a worry,’’ Wilson said. “I want them peaking at the right time. Are they going to peak at the duals but not at the states and the regionals? It’s pretty much a guessing game. You want to minimize the wear and tear on the kids.’’

Individual regional competition in this year’s NCHSAA tournament will be held the weekend of Feb. 8-9 at various sites, with the state championships in all four classifications in Greensboro on Feb. 14-16.

Wilson thinks he has five wrestlers with legitimate shots at a state individual title, headed by his son, Dallas Wilson. At 138 pounds, Dallas is seeking to earn back-to-back state championships. The other four are Nick Minacapelli at 220 pounds, Jared Barbour at 170, Triston Chapman at 126 and Jeremiah Smith at 145.

Two other wrestlers Wilson thinks could fare well are Austin Hunt at 195 pounds and Kevin Pate at 182.

Following is a list of Cumberland County wrestlers who are ranked in the top ten in their respective weight classes by rankwrestlers.com.

The rankings and records shown below were those posted on rankwrestlers.com as of Wednesday, Jan. 30.

Cape Fear is currently ranked third in the rankwrestlers. com 3-A rankings behind No. 1 Southeast Guilford, No. 2 Piedmont and No. 3 St. Stephens.