Experienced Westover ready to be in Patriot title chase 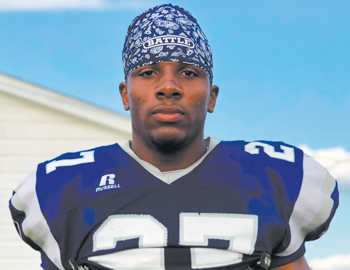 He responded by guiding the Wolverines to a 4-7 record. Now, with more than a year working on the program behind him, he’s optimistic about this fall’s outlook.

“The biggest thing is we’ve got the majority of our offensive line back,’’ he said. “We’ve got our running backs back, and our receiving corps is back.’’

There is one big hole to fill on offense with talented quarterback Xavier Marsh departed.

“Our receiver corps has to make our quarterback look good this year,’’ King said. “When the ball is in the air, we’ve got to attack it.’’

Most of the defense returns, highlighted by linebacker Taurienne Freeman.

“He’s our leader on defense,’’ King said. “He finished last year with 169 tackles. We expect him to do the same thing this year, lead us even more and hopefully get us to the playoffs.’’

Freeman said the focus for Westover this season is being more disciplined and knowing assignments on the field along with getting in the weight room every day.

He said things are already ahead of last year. “Everybody is finally developing as a team,’’ he said. “Everything is starting to fit in. We’re building a brotherhood and building a bond with the coaches, too, so we’re pretty good with that.’’

When it comes to returning the Wolverines to winning football, Freeman said the job for the team is obvious. “Playing hard football,’’ he said. “That’s the only way we’re going to get it back. We’ve got to come out here, play everybody hard and win. That’s how we are going to get our respect back.’’

King is expecting another tight battle for the Patriot Athletic Conference title and hopes the Wolverines will have a chance to be in the picture.

“Everybody is learning the system so when we go into summer all we are doing is getting repetitions instead of doing a lot of teaching,’’ he said. “We’ve got our coaching staff, and a majority of the kids have shown up for spring ball. We won’t lack experience.’’