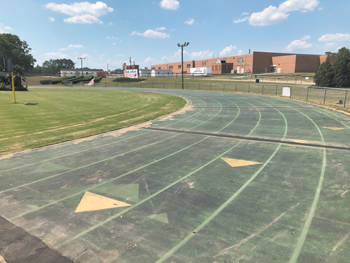 South View track and cross country coach Jesse Autry got a phone call recently that nearly brought him to tears. One of his assistant coaches told him work had finally begun on installing a rubberized track at the South View football field.

It was a successful completion of an arduous process Autry has been chasing for years, culminating in a fundraising effort he championed on Facebook.

Autry wanted to praise everyone who helped. “I can’t say enough at what Dr. (Tonjai) Robertson, Chad Barbour and Vernon Aldridge and everyone has done,’’ he said. Robertson is the South View principal, Barbour the school’s athletic director and Aldridge the student activities director for Cumberland County Schools.

“People have pitched in from our community, and alumni from our teams,’’ Autry said. “It’s really been something.’’

There is still going to be a little more money needed to finish the project completely. What’s been raised so far only covers the track. To be able to host meets at South View, the school will need to upgrade the jumping pits for events like the long jump and high jump.

“I know that the powers that be are working to make it a complete facility,’’ Autry said. “I can tell the effort is there, and they are trying to make sure the money is there.’’

The rubberized track will replace an asphalt one South View has had since 2002. While asphalt is better than the dirt tracks still used at some Cumberland County schools, Autry said it was rough on the legs of his runners. “We’ve had to run in the zero lane, as we call it, which means in the grass on the inside (of the track),’’ Autry said.

“You begin to realize rubber is a safer surface. Rubber is also faster. On asphalt, when kids try to wear spikes, they slip.’’

Autry said the new track will pay for itself because South View can host major meets and get teams to travel to run there. “People aren’t going to drive three hours to race on an asphalt track,’’ he said. “Hosting big meets means making money.”

Athletic director Barbour said the company installing the track has a 90-day contract that started June 10. The plan is to have the new track finished by Aug. 23, before South View’s first home football game.

Barbour said the installation won’t interfere with South View’s fall sports practices. Both the South View football and soccer teams have practice fields independent from the football field where work on the new track will be taking place.