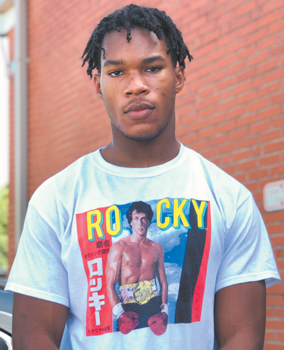 The hashtag on the most recent tweets from the E.E. Smith High School football Twitter account succinctly state the focus of the Golden Bulls' 2019 season: #RevengeTour19.

Smith endured a 0-11 season in 2018, closing the year with an agonizing 70-20 defeat to Cumberland County rival Westover. After that kind of year, head coach Deron Donald said it would have been no surprise if some players wanted to get off the boat. He said he’s not seen any signs of that.

“I can honestly say these guys have done a great job staying together and wanting this program to get back where it needs to be,’’ he said. “That’s a big thing for us now.

"When you get knocked down, it’s how you get back up and respond. This is not only a challenge for the players but for myself, the coaching staff and the E.E. Smith community.’’

Donald said the Golden Bulls are working hard to fix things and rebuild. He’s counting heavily on the incoming senior class to buy into the guidance of the coaches, get stronger in the weight room and realize they have a chance to be special.

“When you go 0-11, you’ll be the group that turned it around,’’ he said. “You’ll always be remembered in the history of E.E. Smith. We’re trying to stay positive, letting our guys know they learn from what happened last year. How you learn and grow and build from it, that’s how a man is measured.’’

Donald spent the bulk of spring practice getting everything installed offensively and defensively. “We’re still going to have to teach during the summertime, but that way we’ll have things already installed,’’ he said. “We can get a lot more things implemented going forward.’’

Getting the team in shape has also been a focus and will continue to be one. Donald said being healthy is critical for his team.

“We’re probably the smallest high school in Cumberland County from a numbers perspective,’’ he said. “One of the main things is being in shape and staying strong. I believe we have a group that can compete with anybody inside or outside Cumberland County, but we have to stay healthy because of lack of numbers.’’

Two big losses Smith has to replace this season are leading rusher Jaylyn Locklear and leading receiver Toshiro Spivey, who both graduated.

Donald said the whole senior class must step up for Smith this season. “Everybody will have a role to play and a part to play,’’ he said. “It’s their team, and we’re expecting those guys to lead this team and do what they’re supposed to do to get us back in position to compete for a conference title and make the playoffs.’’

Top returners for Smith include Marquel Samuel at linebacker and defensive end and Randy Franklin at defensive back and running back.

Donald said both players are being recruited by colleges and have offers on the table. “When you have that type of publicity, I definitely expect you to make plays and be great leaders for the program,’’ Donald said.

Franklin, who recently got an offer from Alabama A&M University, said he feels the Golden Bulls need to get more leadership from the seniors this season.

“We have to set an example for everyone,’’ he said. “That was something we really lacked last year. We have to be stronger, get more disciplined, and everyone has to come together as a team.’’

He said players are trying to learn positions on both sides of the ball so lineups can be more flexible and give starters a chance to rest.

He expects the Patriot Athletic Conference race to be challenging again. “There are some great teams out there,’’ he said. “South View, Pine Forest, great teams. We’re going to give them some competition this year.’’