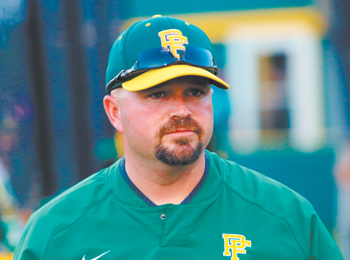 The apprenticeship is over for Jarrod Britt at Pine Forest High School. Now he’s ready for the spotlight at Cape Fear.

Britt said that when he began his coaching career a decade ago, his ultimate goal was to become a head baseball coach. When the Cape Fear job came open, he conferred with Willoughby and then applied for the position.

Cape Fear’s tradition in baseball, which includes a state 3-A championship in 1994, had a lot to do with his decision. “There’s a lot of excellence (there) when it comes to baseball,’’ Britt said. “I have a lot of friends that teach there, too, so I knew it was a really good place to work.’’

Cape Fear is in a transition phase with its administration. Former South View and Scotland High School Principal Brian Edkins will be coming aboard to replace current Cape Fear Principal Lee Spruill.

“It was a plus when I found out Brian Edkins is going to be the principal,’’ Britt said. “He’s just a good guy, (a) really down to earth, honest person that I think I’m really going to enjoy working for.’’

The only bad thing about the timing of Britt’s hire is it won’t allow him to get in any summer work with his new team. The week of July 15-20 is the final dead period for high school coaches in the North Carolina High School Athletic Association to work with athletes this summer. By the time they return from that, the official start of football practice on Aug. 1 is looming.

“You don’t want to run into football season," Britt said. "You’ve got guys that want to play football, and they want them to be able to throw their full attention to that.

“Once the school year gets started and the first dead period is over, you get started with workouts. I want to make sure I have a chance to meet all the guys and kind of figure out what the program is going to look like.’’

Britt said he has high expectations for his first season at Cape Fear. “I’ve heard really good things from the people that were in the program and from the Mac Williams (Middle School) coach that had a pretty good class last year,’’ Britt said. “I’m excited about some of the guys coming up.’’

Britt said his first job will be to make his players understand they need to dedicate themselves to the game, while reminding them that it is a game and they shouldn’t let baseball alone define them.

Britt said he hopes to build relationships with his players and let them see how hard he works so they’ll be motivated to give him everything they have as well.

“Players want to play for guys that they enjoy being around and that they respect,’’ he said. “It’s building a foundation with them so right off the bat they know what I’m all about.’’