Susan Brady is in her first year as girls tennis coach at Terry Sanford High School. Even though she hasn’t been there long, she appreciates the school’s rich tradition in the sport, with multiple singles, doubles and state team champions.

“There’s always  pressure,’’ said Brady, a veteran of United States Tennis Association league play through Highland Country Club where she’s competed for state titles and beyond over the last 12 years.

But her biggest concern is making sure she can handle the basics of coaching with this team when it’s needed, teaching players who need structure or help with groundstrokes or other shots.

Fortunately for Brady this team is pretty sound fundamentally, as it earned the No. 7 ranking statewide in the North Carolina High School Tennis Coaches Association first 3-A poll of the season.

Playing No. 1 singles is senior Katy Beasley, who is also a captain. Brady calls her steady and a motivator for her teammates. “One of the things I love about her is she doesn’t give up,’’ Brady said. “She digs deep no matter what. She has this fight in her that’s essential on the court.’’

Beasley feels her strong points are a slice that catches a lot of her opponents off guard and her ability to move her opponents around the court. As for her being labeled a fighter on the court, Beasley thinks that comes from her refusal to accept a match is ever over. “You can turn it around at any point,’’ she said. “I think that’s a good part of how I play. I play for the point rather than the whole match.’’ 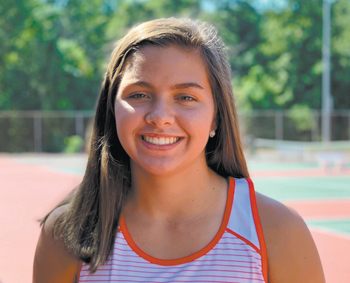 At No. 2 singles is MaryAnna Stiles, a sophomore. While Brady called Stiles one of the sweetest young women she’s ever met, she said she brings an intimidating game face to the court and never loses her cool. “She’s incredibly consistent and fun to watch,’’ Brady said.

No. 3 is Lauren McDonough. McDonough’s game is marked by great groundstrokes and good placement. “She is a good tennis thinker,’’ Brady said. “I can see her setting up shots. Her goal is she wants to win her match and be the first one off the court.’’

The No. 4 player is Caroline Beasley. Brady calls her the life of the tennis party with her bubbly personality. “She keeps us laughing and on our toes,’’ Brady said. But on the court, Beasley takes no prisoners, Brady said. “Her groundstrokes are some of the hardest I’ve ever seen,’’ she said.

At No. 5 singles is Emily Stone. Brady said you can tell from watching Stone she played tennis from a young age. “Her strokes are great and she’s very solid,’’ Brady said. “She brings a lot to the court.’’

The Bulldogs are 3-0 this season through Tuesday, Sept. 3.