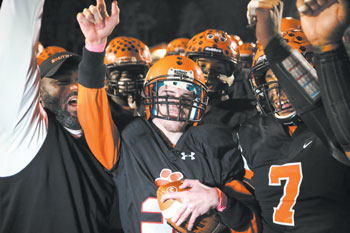 South View athletic director Chad Barbour said Tyler Bazzle is the kind of student who brightens your day whenever you see him.

Despite being hampered by cerebral palsy that makes him non-verbal and forces him to walk with the help of a walker, Bazzle is a friendly, outgoing youngster who is beloved by his teachers and fellow students.

He also loves the Tiger football team, and Barbour came up with an idea for allowing him to experience being a part of the team firsthand.

In September, Barbour approached head coach Rodney Brewington with the idea of allowing Bazzle to put on a uniform, go on the field with the rest of the team and score a touchdown.

Brewington took the idea and in Barbour’s words, ran with it. He put together a full uniform for Bazzle, down to equipment and shoes, and gave it to him to remember the special night, which they scheduled for South View’s homecoming game with E.E. Smith.

Barbour then reached out to Smith athletic director Lawrence Smalls to clear it with him. The plan was to delay the kickoff of the game and run an unofficial play near the goal line with Bazzle carrying the football prior to the actual kickoff.
Barbour said Smalls agreed immediately, saying anything that the schools can do for kids they’re going to do.

Just to cover all bases, Barbour also spoke with Neil Buie, the regional supervisor of high school football officials for the Southeastern Athletic Officials Association and the North Carolina High School Athletic Association.
Buie and his officiating crew bought in, manning their usual positions on the field while the play with Bazzle was run.

The ball was handed off to Bazzle, his walker shoved to the side, as his best friend Kevin Brewington and South View star running back Matthew Pemberton helped Bazzle into the end zone for his touchdown.

Long after the game was over, Barbour said Pemberton removed his game cleats and presented them to Bazzle as another gift.

Barbour said the whole evening was a testament to the all-inclusive athletic program that has been promoted by Vernon Aldridge, the student activities director for Cumberland County Schools.

This winter, plans are in place to add bowling to the list of Unified Sports the county offers.

Aldridge said he thought the special ceremony for Bazzle fit in perfectly with the county’s goal of inclusiveness. “I would love to have a unified sports in each of our sports seasons,’’ Aldridge said.