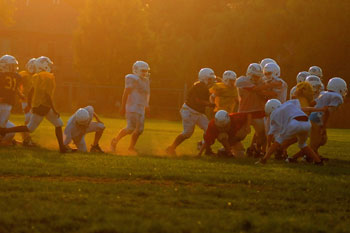 The final pieces of the football puzzle fall into place Friday night as the regular season comes to an end for teams in the North Carolina High School Athletic Association.

Saturday around lunchtime, coaches and fans will be sitting in front of smartphones, iPads and laptops hitting refresh over and over as they wait for the NCHSAA to post this year’s state playoff brackets so they can get their first certain look at what the path to a state football championship will look like.

I both love and hate this weekend — love it for the excitement of finding out where everybody is paired and hate it for the annual agony of incorrect information that causes seedings to have to be recalculated and brackets redrawn.

Here’s hoping everyone pays attention to the data when they report their final records to the NCHSAA so we can all get back to business as usual Saturday afternoon.
The record: 59-16
I had another perfect week last Friday, going 7-0, to improve the score for the season to 59-16, 78.7 percent.

This will be the last week of anything that comes close to easy predictions. Once the state playoffs begin next Friday it gets a lot more complicated.
E.E. Smith at Cape Fear - The red-hot Colts are looking for a piece of the conference title and hoping for some help to allow them to move up higher in the playoff seedings.
Cape Fear 28, E.E. Smith 14.
Westover at Gray’s Creek - Gray’s Creek should wrap up the regular season with its third win in a row against a struggling Wolverine team.
Gray’s Creek 30, Westover 17.
Jack Britt at Seventy-First - Both teams are looking to rebound from losses. I like Jack Britt’s chances better.
Jack Britt 24, Seventy-First 18.
Pine Forest at Terry Sanford - Reminder to Bulldog fans, this game will be played at Fayetteville State’s Jeralds Stadium as Terry Sanford celebrates Senior Night.
It’s a big game for both teams but even bigger for Terry Sanford as it seeks to wrap up a piece of the Patriot Conference title and the No. 1 3-A seed from the conference in the state playoffs.
Terry Sanford 30, Pine Forest 22.
South View at Overhills - The Tigers are looking to seal the No. 1 4-A playoff spot and a share of the Patriot Conference title. I think they’ll get it.
South View 32, Overhills 12.
Douglas Byrd at Fairmont - The Eagles try to end a difficult season with a win.
Fairmont 21, Douglas Byrd 14.
Other games: Trinity Christian 31, Southlake Christian 16.