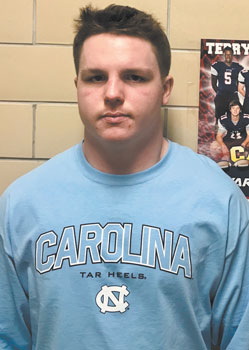 Former South View High School defensive coordinator Melvin Braswell used to say the best measure of the value of a defensive player to his team was how far he was from the player with the ball at the end of a play.
Bruce McClelland, head coach at Terry Sanford, hasn’t handed out those kind of grades for his defense, but if he did, the marks for middle linebacker Jackson Deaver would be high.

“He’s one of the guys in the biggest games who always makes plays,’’ McClelland said of Deaver.

Deaver recently earned a name for himself in the school’s record book by breaking the career record for tackles held by his former teammate, Dante Bowlding.

He has 125 tackles for his senior campaign. That includes 12 tackles for loss and two sacks.

He’s also had a pair of interceptions, caused four fumbles and recovered two.

Deaver’s performance hasn’t gone unnoticed by others. He’s a team captain for the second year in a row and has twice been named to the Patriot Athletic All-Conference football team.

This is Deaver’s fourth year in the Bulldog football program. Early in his career, when Terry Sanford was awash with good linebackers, he was briefly moved to defensive line, but he’s spent the last three seasons anchoring the defense from the middle linebacker spot.

“He’s obviously a great athlete and great player,’’ McClelland said. But that’s not the only reason Deaver has been so successful on the football field.

“The biggest thing is preparation,’’ McClelland said. “He’s second to none with any player I’ve ever coached on the defensive side.’’ McClelland puts Deaver in the same company with former Bulldog greats Mark Gilbert and Isaiah Stallings.

“This guy does a ton of film prep,’’ McClelland said. “He can tell you every position we are lining up in, what our defense is before our coaching staff does. His ability to get everybody else on defense on the same page is remarkable.’’
Playing defense is a challenge for a lot of players today because of the growing concerns about keeping head contact out of the game. There was a time in football years ago when defenders would use their helmet as a weapon and try to make contact with it when tackling opponents. The concerns that that contact leads to concussions, which some studies show is linked to the possible of permanent brain injury or disease, has caused football coaches to change the way they teach tackling to their players.

McClelland thinks it’s been a change for the good, seeing new tackling techniques focusing not just on taking the head out of the game, but on getting players to wrap an opponent up and make a more sure tackle. “The biggest thing I see is an improvement in the tackling of defenses week to week,’’ McClelland said.

Deaver, who began playing youth football at the age of eight, said all the instruction he’s received since being in high school has focused on eliminating head tackling. “Even though there have been a lot of changes to tackling, the grand scheme of things is to get the guy down on the ground,’’ Deaver said.

Deaver feels he and the rest of the Bulldog defenders have done a good job of that this year.

As this story is being written, Deaver and Terry Sanford were preparing for their state 3-A playoff opener against Wilson Fike on Thursday, Nov. 14, at John Daskal Stadium at Reid Ross Classical School. “Defensively I could not be happier with our guys,’’ Deaver said. “Our run defense is phenomenal. I think if we keep doing what we’re doing and stay focused, we should make a good run.’’

Deaver is hopeful that when his Terry Sanford career ends, he’ll be playing at the college level, but he’s not sure if it will be football or baseball.

He’s talented in both, and he’s already courting football interest from UNC-Pembroke, Wofford and Limestone. “They may put a little more weight on him and put him at middle linebacker,’’ McClelland said of Deaver’s college future.
Currently Deaver said he’s about 6-feet tall and weighs 225. “I’m not leaning toward anyone,’’ Deaver said. “I’m looking for somewhere I can call home for the next four years, somewhere I’ll feel happy and like I’m part of a family.’’