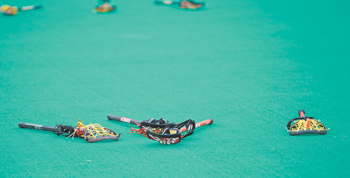 Wes Davis is on a mission to get young women to put down their smartphones and trade them in on a lacrosse stick.

“Girls lacrosse is the fastest-growing sport for high schools around the United States for four years in a row,’’ he said.

His love for the sport led him to approach the Fayetteville-Cumberland County Parks and Recreation Department eight years ago to ask them to start a lacrosse program.
“They said they were starting but only had four or five girls sign up,’’ Davis said.

So he went on a recruiting mission to elementary and church league basketball teams.

Davis feels girls’ lacrosse shares common ground with the sport of basketball, calling it more of a finesse game and less physical than boys’ lacrosse.
“We use the same skill set as basketball and soccer,’’ Davis said. “We run set plays. We run zone defense. We do the pick and roll.’’

Davis wound up with 19 girls that first year who agreed to give lacrosse a try. Two years later he began the Fayetteville Flames club lacrosse team for girls.

“It was a way for girls playing in the spring to play in the summer and the fall,’’ he said.

Through his work with the Flames, offseason opportunities for girls have continued to grow.

Last spring he had about 135 girls involved in his program.

The spinoff is visible in the local high schools as Cape Fear, Terry Sanford and Jack Britt have girls’ teams. Davis said Fayetteville Academy is planning to field a girls’ team this year.

Meanwhile, Davis is continuing plans to offer offseason opportunities for lacrosse players. His Flames program will conduct a short season in the summer, from around May 7 to June 7. That will be followed by a more extensive program during the fall, which will run from around August 24th until Nov. 1st.

In the meantime, both high school and recreational lacrosse are getting set to start up for the spring, with the program at the Fayetteville-Cumberland County Parks and Recreation Department and the local high schools fielding teams scheduled to kickoff this week on Thursday, Feb. 13. “They provide the equipment for you, which is pretty awesome,’’ Davis said of the recreation program.

Interested athletes at the high schools with teams should contact the school athletic director or lacrosse coach. Anyone interested in the parks and recreation program should call the lacrosse director, Robert Corzette, at 910-433-1393.

Davis said one of the biggest challenges in growing the sport locally is finding good coaches, but they’ve been helped in that effort by Fort Bragg, where a number of people with experience playing and coaching the sport are stationed.

He also said the lacrosse program at Methodist University has been supportive of the local club program.

Davis said the recreation department program is especially important because it exposes the girls to competition from established lacrosse areas in the state like Pinehurst, Raleigh, Apex and Holly Springs.

He hopes more girls will take part in the sport and see it as a possible avenue to a free college education. “We’ve had a lot of girls get college scholarships,’’ Davis said, noting that seven girls from the Flames program are competing at either the Division I, II or III level.

One of them is Davis’ daughter, Mattie Davis, who signed with Jacksonville University, a traditional women’s lacrosse power. Jacksonville was 17-4 last year, won the Atlantic Sun Conference and qualified for the NCAA tournament.
Davis has scored 104 goals in her career at Terry Sanford with one season left.