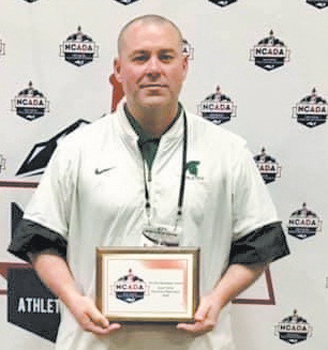 Jason Norton was remembered by his peers as someone who was easy to talk with, who wanted to win, but above all did everything for the benefit of the athletes at his school.

Norton, 47, who served as athletic director at Pine Forest since 2015, after an outstanding career as both an athlete and coach in his native Richmond County, died earlier this month after a lengthy battle with cancer.

He is survived by his wife, Lauren and sons Alex, Kevin and Jase.

Norton was an all-American placekicker at Catawba College, while playing for two state championship football teams at Richmond Senior and coaching a third.
He joined the staff at Pine Forest as athletic director in 2015, continuing to work there until the disease forced him to step down after the 2019 school year.

“He was very genuine,’’ said Pine Forest principal David Culbreth. “When he came to Cumberland County, he was excited to have the opportunity to be an administrator and an athletic director. It made everything easier with the enthusiasm and energy he brought.’’

“I don’t think you could have met a nicer, kinder person than Jason,’’ said Vernon Aldridge, student activities director for the Cumberland County Schools. “His ability to build relationships and be a good listener is what drew people to him.’’

Chad Barbour was the athletic director at South View when he first crossed paths with Norton and they became close friends. Barbour is now principal at Cumberland Polytechnic High School.

“He wanted the whole program to be successful and he wanted to get the best people in the positions he had,’’ Barbour said. “He had high expectations for the way students were supposed to conduct themselves.’’

One of Norton’s closest friends was David May, who coached with him at Hamlet Junior High School and was on the coaching staff at Pine Forest when Norton became athletic director.

“He’s worn so many hats in his life, coaching, teaching and being a father and a husband,’’ May said. “I can’t tell you how many people he’s taken to football camps all over the country with his boys that wouldn’t have had the opportunity to go.

“I know he’d be looking down right now amazed at all the love and support he’s receiving, how highly people thought of him. He wasn’t a vain type of guy who looked for praise.’’