Karcher discusses coaching in the midst of COVID-19 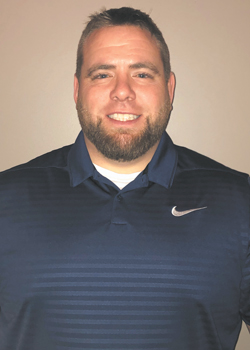 The months leading up to the summer break are normally a time when coaches at North Carolina High School Athletic Association member schools are allowed to have off-season conditioning workouts with their teams if they coach a sport that’s not in season during winter or spring.

But that hasn’t been the case for E.E. Smith football coach Andy Karcher, who took over the Golden Bull program in late February. Barely three weeks after being hired and joining the faculty at Smith, Karcher found himself cut off from his team as the COVID-19 pandemic forced a shutdown of high school sports in North Carolina.

Now Karcher, along with other coaches in Cumberland County, is anxiously awaiting the arrival of July 6, when they will be permitted to begin conditioning workouts with their teams under stringent safety guidelines suggested by the National Federation of State High School Associations and the North Carolina Department of Health and Human Services.

Karcher, who came to Smith after serving as an assistant coach under Bill Sochovka at Pine Forest, got a few weeks to see some of his football players in weightlifting class at Smith, but has since been limited to only virtual contact with them.

“We’re putting in a new offense with new terminology,’’ Karcher said. “We’re trying to do as much as we can with the mental game.’’

One of the real challenges of only being able to meet virtually, Karcher said, is getting his athletes used to accountability, showing up on time, or showing up at all.
“For me it’s been extremely stressful trying to move forward,’’ he said.

He said he’s done the best he can talking to his players about the importance of maintaining their conditioning, taking part in regular workouts at their homes.
“I think when we come together, we’ll be able to hit the ground running,’’ Karcher said.

But there are still questions, he added, noting that between answering questions from his players and his new coaching staff, they are all finding themselves in totally uncharted waters.

“It’s really challenging me to find creative ways to get things done,’’ he said. The challenge has been complicated by the fact that whatever ideas Karcher comes up with, he has to make sure they take into account the need for things like social distancing and the other restrictions still in place because of the pandemic.

He praised members of his new coaching staff for adapting to the challenge as well. “They have taken it upon themselves to attend virtual coaching seminars,’’ he said. “They are trying to learn more about what we’re trying to do.’’

Karcher has also reached out to coaching friends like Sochovka and Ben Penny at Triton High School for suggestions on what to do. “It’s about talking and sharing,’’ Karcher said.

One of the biggest things he can’t control, and won’t be able to deal with until the first official day of fall practice when it comes, is learning how his team will deal with the physical aspect of football.

“Football is a contact sport,’’ he said. “As soon as we can get back to some normalcy, the kids’ spirits and our spirits as coaches will lift.

“The biggest thing now is trying to come up with a plan that is going to make sure the kids are mentally ready.’’

The most important thing Karcher wants to teach is teamwork, finding out how much his players know and trust each other so they can get through the challenge together.
“That’s what I love about football,” Karcher said. “It’s a sport that translates to everyday life after high school.’’

He hopes his players will adjust to the restrictions of COVID-19 workouts quickly, but most important of all, that they stick to them. “Follow the procedure as you’re supposed to follow it,’’ he said. “Make sure everybody is staying safe.

“This might be the new norm for awhile. We have to be flexible and do what we can do. We want to make sure everybody is doing what they are supposed to do so we can arrive at the season and it (the restrictions) won’t be prolonged any longer than it needs to be.’’