Pone’s dedication to youth honored with renaming of center 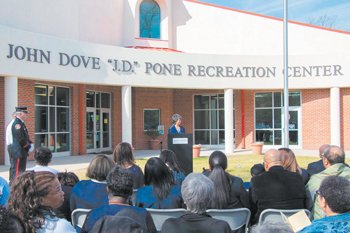 Gerald Pone said his late brother John Dove “J.D.” Pone wasn’t an exceptional athlete, but that it never stopped J.D. from being an avid promoter of opportunities for Cumberland County young people to take part in a variety of sports.

At a ceremony held Saturday, March 30, Cumberland County honored Pone for his years of work on behalf of the county’s youth. The county officially renamed the Gray’s Creek Recreation Center the John Dove “J.D.” Pone Recreation Center in his memory. The center is located at 2964 School Rd. in Hope Mills. In addition to having his name placed on the front of the building, a plaque was unveiled inside.

Delivering remarks during the ceremony were Dr. Jeannette Council, chair of the Cumberland County Board of Commissioners; Helen Brockett of the Gray’s Creek Ruritan Club; and Dachia Pone Davis on behalf of the Pone family.

The ceremony was hosted by the Cumberland County Commissioners. The naming of the center was unanimously approved by the commissioners in memory of J.D. Pone, who passed away in April of 2016.

Pone worked as a volunteer with various youth organizations in Cumberland County, including the Gray’s Creek Youth Association, and served as chairman of the Fayetteville-Cumberland Parks and Recreation Advisory Commission. He was also a member of the board of directors for Communities United for Youth Development.

In addition to his work with youth programs, Pone was deputy chief of the Gray’s Creek Fire Department Station 24 and chaplain for the Cumberland County Fire Chiefs’ Association.

Gerald Pone, J.D.’s brother, was a basketball player for Ron Miller at South View High School. He remembers 30 years ago when the Gray’s Creek community began to organize sports opportunities for young people.

He and J.D. both had sons who were old enough to play recreation sports, and J.D. became a coach.

“He just fell in love with it,’’ Gerald said of J.D. “They asked him to be on the advisory board for Cumberland County. He’s the kind of person who hated to say no to anything. He became involved in that as well.’’

Gerald said his brother showed no special allegiance to any particular sport.

“It didn’t matter if it was baseball, basketball, football soccer or whatever,’’ Gerald said. “As long as the children participated, he wanted them involved in something that  off the streets, keep them focused on athletics.’’

Gerald said the options to play sports that his brother helped promote were a large vehicle for young people in the Gray’s Creek community to take them other places in life.

He said his entire family was deeply honored by the ceremony put on by the county to rename the recreation center for his brother.

“It was overwhelming,’’ he said. “My family and I appreciate all the support, everyone who showed up, even those who didn’t show up but thought about us. It was fantastic.’’

Gerald added that it’s important that the name of someone like his brother will live on at the recreation center.

“Young people need to know there are people in the community that really care about them,’’ he said, “not only to see them in sports, but to see them involved in anything that’s going on to help them succeed in life.

“That’s where his heart was,  wanting to see the growth of young people.’’