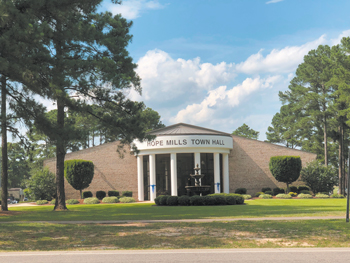 The town of Hope Mills will hold its annual observance of National Day of Prayer on Thursday, May 2, at noon at the flagpole at Town Hall.

In the event of inclement weather, the ceremony will be moved indoors to the nearby Parks and Recreation Department building.

Clergy and lay people from various denominations in Hope Mills will participate in the ceremony, according to the Rev. Bob Kretzu of Hope Mills United Methodist Church.

“I think we tend to forget the spiritual aspect of our national life,’’ said Kretzu. “We watch the news or listen to news or read the news, and we complain. We think, what can we do?”

Kretzu suggested the answer is prayer. “We can have a huge influence through prayer,’’ he said. “I think most Christians believe that. You can accomplish things in prayer long before they are manifested physically.’’

The theme of this year’s National Day of Prayer is “Love One Another.’’

“That is such a need for both our community and our nation, to stop being divided and treating each other like enemies and pariahs, to love one another as Americans, whether or not people are Christians,’’ Kretzu said, “to start showing that by the way we respect each other.’’

Kretzu said anyone who believes in prayer, regardless of their faith, is welcome to attend the Hope Mills event. “I’ve joined in worship services at mosques and synagogues,’’ he said. “I think people of faith in prayer have a lot in common, even if they’re not members of the same religion.’’

Pastor Wesley Holmes of the Hope Mills Church of God agreed with Kretzu that prayer brings people together and helps unify both the community and the nation.

“I think a lot of times we can learn from one another and see we don’t have as many differences as we think we do,’’ Holmes said. “We’re serving the same God, coming together to pray to the same God. We may use different methods of doing that, different backgrounds we come from, but we’re praying to the one, true God.’’

Holmes is also appreciative that local government leaders come to take part in the National Day of Prayer observance in Hope Mills. “It’s on our money: In God we trust,’’ Holmes said. “If we don’t trust in God, we’re never going to make it in this life.

“Jesus said to love your neighbor as yourself. If you serve God, you’re going to have love in you. In 1 John it tells us that God is love. I think loving one another brings unity to the faith and understanding that God is all about love. We need to love one another as well.’’

Hope Mills Mayor Jackie Warner signed the proclamation recognizing the National Day of Prayer in Hope Mills. She has been a regular participant in the event since she was first elected the town’s mayor.

“The National Day of Prayer in Hope Mills is significant because of the number of denominations that participate,’’ she said. “We have a great turnout of all the churches in the area as far as pastors that are leaders.’’

Traditionally, prayers are offered at the Hope Mills observance for a variety of things, including the town’s mayor and Board of Commissioners, first responders, the military and schools.

“As a leader and as a Christian, I think it is important we take the time and opportunity any time we can to pray and also to be an example for others,’’ Warner said.

“I’m a United Methodist, but the Baptists are there, the Catholics are there, the Episcopalians, Presbyterians, Church of God, we have everything. We’ve had a rabbi before. We represent all religions in Hope Mills, and that’s what I think is important, too.

“I think that show of strength in prayer is one way we can come to some solutions for some of the issues we are facing.’’