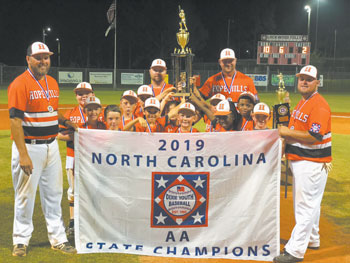 When asked to single out the best players on his state championship Hope Mills National 8U Dixie Youth Baseball team, coach Jesse Cox couldn’t come up with an answer. “I love all 12 of them,’’ he said. “Every kid did a job and did it well.’’

Cox, who has been coaching Dixie Youth baseball for six years, will join his fellow coaches and the national team on a long ride to Ruston, Louisiana, for the Dixie Youth 8U World Series. Opening ceremonies are July 26. Hope Mills will begin pool play at 9 a.m. the next morning against Alabama and then at noon against South Carolina.

Cox said he got input from his fellow coaches and their wives when putting the all-star team together.

The 8U level in Dixie Youth is what’s known as a coach-pitch league. The players from each team don’t pitch in the games. A coach from each team pitches to his own players when they are at bat while the opposing team is in the field playing defense. There is a pitcher on field with the coach who is pitching, but that pitcher only plays the position as a defender.

Since there’s no way to scout the opposition before going to the World Series in Louisiana, Cox said he’s focusing on the basics with his team along with trying to raise money any way possible to help pay the team’s many expenses for the 13-hour trip.

“We are preparing for another tournament, the next six innings of baseball,’’ Cox said. “We keep a level-headed focus with these guys so they don’t see any intimidation factor.

“We make them feel like, mentally, they can play with anybody. That’s how we approach every practice and every game.’’

Cox said there have been no changes to the way the team practices, just sticking with fundamental baseball.

The top two teams in each division of pool play at the World Series will advance to the eight-team double elimination championship bracket. The teams that fail to qualify will be placed in a consolation bracket where they will compete separately before heading home.

Cox’s team has held a number of fundraisers, including seeking corporate sponsors for a banner. If anyone would like to make a last-minute contribution to the team before they leave July 26, contact Cox at 910-308-5524.