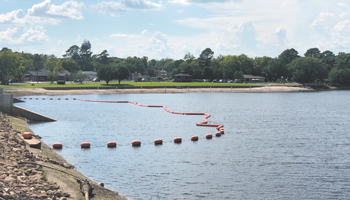 The long-awaited bulkhead down the shoreline at Hope Mills Lake is finally complete. Now Public Works Director Don Sisko says it’s up to Mother Nature as to how quickly lake levels return to normal.

“We have no control over the inflow of water,’’ he said just days after the work on the bulkhead was completed. “The gate is open minimally so we can maintain the flow in the creek downstream.

While the lake was lowered, Sisko said, people could actually see one of the primary reasons the bulkhead was needed: to deal with erosion of the embankment.

“There were folks that were of the mindset you could put some soil there, maybe some sod, that would control the erosion,’’ he said. “The erosion would have a safety impact for the general public.’’

The bulkhead will make the park area near the lake more family-friendly, he said, so people can safely spread out a blanket and watch their children swimming or just enjoy the natural beauty of the lake.

In addition to the bulkhead, there are now steps down to the water and a beach area for launching kayaks and canoes into the water. “People can put their craft in the water without reaching to get over any riprap, rocks or that
sort of thing," Sisko said.

Sisko sees no major issues as far as maintaining the bulkhead. “It’s made of natural material (Southern yellow pine) and it will shrink in dry periods and swell in wet periods,’’ he said. “We may have to do some sanding here and there if it splinters out.’’

The wood will be heavily treated with a preservative called chromated copper arsenate, which is used to protect outdoor wooden structures from microbes and insects.

“I don’t anticipate anything out of the ordinary for years to come, barring a catastrophic event,’’ Sisko said.

The yellow tape that is in place in areas around the park will likely stay there for awhile as new sod is being installed. “We don’t want any foot traffic on it,’’ Sisko said “We want it irrigated and rooted properly so we have a good standing of grass.’’

Sisko hopes the end product is a park area the citizens of Hope Mills can enjoy. “They get to come out and create their own memories,’’ he said. “We want to give them an open
space to enjoy.’’

“I know our community is ready to use the lake because of the extreme heat we are experiencing,’’ said Mayor Jackie Warner. “The good news is it won’t be much longer.’’

Commissioner Pat Edwards said the town will likely look into more plans for erosion control at the lake but added that for now, “The bulkhead looks great.’’

Commissioner Jessie Bellflowers thanked all the members, past and present, of the town’s Lake Advisory Committee for their work on developing the bulkhead project and the public swimming area.

He further praised the various companies that worked on the project, along with town staff who were involved. “The Hope Mills Lake park is a great addition to the town’s already impressive parks and recreational programs,’’ he said. “Our lake park is one of the best family parks that directly impacts the quality of life by contributing to the social, economic ... and environmental well-being of our community.’’