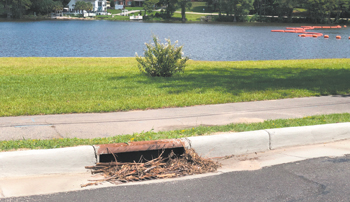 Hope Mills town officials are concerned about the recent increase in yard debris and the negative impact it could have if it’s allowed to block the town’s storm drain system.

That’s why community officials are reaching out to citizens to do the best they can to make sure debris is cleared from their yards before a major storm hits the town again.

Tyler Riddle, a stormwater technician for the town, said the major culprits among lawn debris include grass clippings, leaves and limbs, but it doesn’t stop there.

“If it can be picked up by the water and possibly make it to a drain, it’s going to hinder the amount of water that can get in that catch basin,’’ he said.

The catch basin is the structure you see with a metal grate at street level and a wide opening for the water to flow through into the storm drain.

Problems mount when yard trash winds up in the street and is swept into the catch basins around the town.

“Everything that’s in the street is going to run to that catch basin, even pine straw,’’ Riddle said. “It’s going to cover that grate on the catch basin and not allow water to come through.’’

Worse, large amounts of yard waste can get into the catch basin and, from there, the storm drain pipe system. Over time, it accumulates to further hinder the flow of water though the pipes.

Eventually, the pipe itself can get clogged, requiring cleaning with a pumping truck and a sewer jetter, a drain-cleaning machine that uses high-pressure water to knock the debris free.

“That’s going to cost the taxpayers money,’’ Riddle said. “They’re the ones paying for it in the long run.’’

Riddle said town staff does as much as it can to keep the streets clear of debris that could foul the storm drains, but with so many drains located all over Hope Mills, it’s an impossible job for the staff to complete alone.

“Everybody who helps out, it’s not just helping the town, it’s helping yourself in the long run for your street not flooding and water not backing up in your yard,’’ Riddle said. “The cleaner you keep the streets, the better everything works.’’

Some people may choose to mulch their yard waste and use it on a home garden if they have one, Riddle said. Otherwise it’s best to make sure all yard debris is left in a trash can to be collected by the town.

“If you rake it up and put it in a (garbage) container, that’s the best way to get rid of it,’’ Riddle said. “Once you put it in that container, it’s not going anywhere but in the truck.’’

Pictured: A catch basin adjacent to Hope Mills Lake with the kind of debris that can be swept from yards and cause problems for the storm drain system