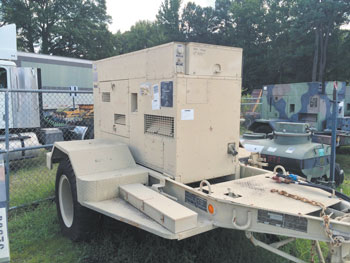 A short time ago, the Hope Mills Police Department swung an amazing deal to get a new tactical vehicle for special situations.

Now the Hope Mills Fire Department is following suit, helping secure a generator that will provide power to keep Town Hall up and running enough to do business during times of power loss.

Deputy Chief Steve Lopez of the Hope Mills Fire Department wears a number of hats. In addition to his role as a firefighter, he is also the operations chief for the fire department and the town safety director for Hope Mills.

After a lengthy search, Lopez has located what is called a tactical quiet generator that he is now working to get final approval and installation for.

Lopez said that when the Town Hall building was originally constructed, the intent was to get a generator.

For whatever reason, that never took place, and after Hurricane Florence, when power was out to Town Hall for eight days, something needed to done.

“We had a sit down (after Florence) and did a lessons learned type of thing,’’ Lopez said. “The problem we were having was the fact all the infrastructure for the servers and the phones were located in the Town Hall.’’

During that same period of time, Cumberland County dispatch services were also down for two or three days. That meant certain services could not be dispatched by radio or reached by telephone. “The gist of the situation was we needed to try to get a generator here as quickly as we can,’’ Lopez said.

But that’s a lot easier said than done. A generator of the type Hope Mills needed to keep Town Hall running cannot be purchased at the typical big box chain. The cost for a new one runs upwards of $35,000, which is well beyond the reach of the town budget.

Lopez began looking at options available via military surplus. “The thing with generators on the military side is they are very powerful, they are made to government specifications and they are made to operate in the worst conditions,’’ he said.

Lopez finally found what he was looking for with a federal surplus outlet in Raleigh. The cost was only $3,975.

He checked it out and brought a generator mechanic with him. “He tested it and it passed with flying colors,’’ Lopez said.

He then took the generator to a local trucking company to do further checks on the generator’s diesel motor. “They judged it to be in super condition,’’ he said.

“It’s very, very quiet,’’ he said of the generator when it’s operating. “It’s actually used in a forward area where you have to keep the noise to a minimum.’’

The next step will be to get an estimate on the cost for installing all the hardware needed to connect the generator to Town Hall and set it up so it will automatically turn on just 1.5 seconds after the building loses power in the next storm event or other cause of power failure.

Should the cost to do all the connections run over $5,000, Lopez said it will have to go to the Board of Commissioners for final approval.

Lopez added the generator is not designed to power Town Hall completely like normal current would, but he also noted that not everyone comes to work when power is out so every light and power outlet in the building won’t be needed in that situation.

“There are critical functions in a municipality that need to stay functioning or have the ability to function,’’ Lopez said. “The manager’s office is one and payroll is another. We prioritize which areas we want stood up (powered).’’

Another major consideration is the detrimental effect no power can have on some equipment. During the time of Florence, Lopez said it got too humid inside the building, causing problems for some of the town’s computers.

“This generator should power pretty much everything we need in a storm event and post-storm event,’’ Lopez said.