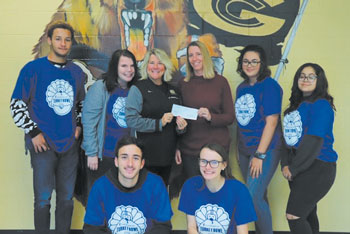 A group of students from Gray’s Creek High School recently earned statewide recognition from the North Carolina High School Athletic Association for participating in a contest to help raise money to provide food for those in need.
The NCHSAA in cooperation with United Health Care sponsored the annual Turkey Bowl, which invited NCHSAA member schools to compete in a statewide fundraising effort.

The contest was held Nov. 4-8, and the participating schools were free to choose how they wanted to take part in collecting food or money for the project.

They could either raise money to donate to an actual food bank or collect food for an on-campus food pantry.

LeAndra Barriage is a biology teacher at Gray’s Creek and also serves as the school’s Student Government Association advisor. She learned about the Turkey Bowl from Gray’s Creek athletic director Troy Lindsey.

The SGA at Gray’s Creek is composed of the class and student body officers at the school. Barriage enlisted the officer corps to take part in the competition.

Annually, during the month of November, Gray’s Creek has long been involved in something called Bears Giving, where the school collects food to give away to the Gray’s Creek Christian Center.

For the Turkey Bowl, Barriage said the students decided to raise money to give away to the center by doing something the school calls Minute to Win It.

The plan was to hold a one-minute period of donations during the daily announcements at Gray’s Creek.

They also made announcements to promote the upcoming event and posted signs around the school.

The morning of the fundraiser, a song was played for one minute over the intercom, and every class in the school contributed money during that time period. The class that raised the most money was treated to a free breakfast.

When it was over, Gray’s Creek had raised $800, which ultimately earned it second-place in the statewide NCHSAA competition.

The school later presented a check for that amount to the Gray’s Creek Christian Center.

Barriage said the school likes to support the Center because it serves anywhere from 75 to 100 families in the Gray’s Creek community on a weekly basis.

“I think it’s good for the kids to think beyond themselves and realize they are just a part of the community,’’ she said. “It is important to kind of give back to those who might be having a difficult time.

“At one point or another in our lifetime, we’re all probably going to be in that position where we need a little help. I think it’s truly important to recognize when we have the ability to help we should do those things.’’

While $800 might not seem like a tremendous amount of money, Barriage said the students were told that every dollar donated in the fund drive represented four meals, which means the money raised by the Gray’s Creek SGA paid for 3,200 meals for those in need.

“I think that was kind of awe-inspiring,’’ Barriage said. “A little goes a long way.’’

Carlisle Eley and Mary Ledford, two of the Gray’s Creek students who took part in the fundraiser, agreed participating in the event was meaningful to them and their classmates.

“The more we donate to them, the more it helps our community,’’ Eley, a junior, said of the Gray’s Creek Christian Center. “I was really surprised by how much money we got.’’

Ledford, a freshman, thought the donation of money was a good combination with the existing Bears Giving program at the school. “We thought adding the money would be another way to give back,’’ she said. “It directly affects students who go to our school and directly affects everyone who lives in our immediate community.’’

While Ledford appreciated the statewide recognition from the NCHSAA, she added that wasn’t the most important part of the project. “It went to our community center,’’ she said. “That is the best part.’’