Citizens announce preference for next stage of Heritage Park 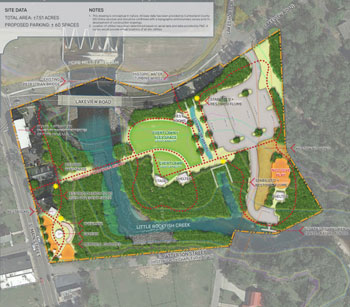 The citizens of Hope Mills have spoken on which direction they’d like the development of the Heritage Park master plan to take. Now, it’s just a matter of getting the final pieces in place and securing grant money to begin actual work on the project.

Lamarco Morrison, head of the Hope Mills Parks and Recreation Department, said there were no major surprises when citizens responded to a request for input on the master plan at a meeting held in mid-December.

All three of the proposed plans for Heritage Park depict the Parish House as still standing.

Morrison said he told the design team to show the Parish House on all the plans but not to include it in anything yet to be developed as action is still needed by the board on what will happen to it.
There were four areas of concern the citizen input focused on. They were park character, amenity needs, program needs and criteria for prioritization.

Historic and cultural preservation were tops in two of the four categories, earning 26% under park character and 24% under criteria for prioritization. Also a high priority was adventure at 25% under the program needs category.
Leading the way under amenity needs were nature trails at 24%.

The only other item that hit the 20% mark was sustainable at 21%  under the park character category.

Items that reached 15% or better were educational under park character at 16%, amphitheater at 15% under amenity needs and concerts at 17% under program needs.

The version of Heritage Park most people preferred keeps the main parking area near the intersection of Lakeview Road and Lakeshore Drive. It also allows for about 15 more parking spaces than either of the other two plans.
Called Concept C, Morrison said it has the least impact on the existing sewer line and takes advantage of the natural layout of the land.

“It preserved the most open space and took into account a lot of the site features we need to be aware of,’’ Morrison said.

Even though Concept C was preferred, Morrison said the town is still taking input from citizens. All three site plans are available on the Parks and Recreation Facebook page.
Anyone who would still like to comment on which plan they prefer is welcome to contact Morrison directly via email at lmorrison@townofhopemills.com.

Morrison said one of the big advantages of using Concept C is it keeps the parking area away from potentially flood-prone portions of the proposed park.

While some of the walking trails in the park would be able to survive occasionally being flooded, Morrison said it’s not good planning to put the parking area in a space that could be subject to frequent flooding.
Morrison said many of the favorable comments were in support of the trail system because it takes advantage of what is called pedestrian circulation.

The preferred plan will also allow the town to use a piece of property it already owns on South Main Street and install an overlook, Morrison said.

“That was a pleasing feature not only for the park, but for the people driving by,’’ he said.

The next big step will be to apply for a Park and Recreation Trust Fund.

Morrison has worked in other municipalities that received PARTF grants. If there are no further delays in the project, Morrison said Hope Mills could be awarded the grant as soon as August of this year, and work on phase one of Heritage Park could begin as late as the end of this year or sometime early in 2021.

“We are excited and ready to get phase one started, regardless of which way we go,’’ he said.