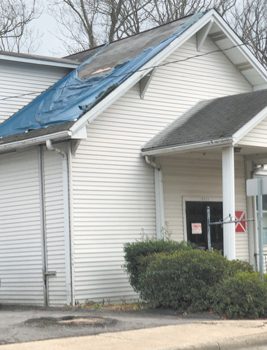 Few people are more qualified than Hope Mills commissioner Bryan Marley to speak on the situation involving the future of the town’s Parish House.

In addition to being one of the newest members of the Board of Commissioners, Marley has dedicated his life to the job of firefighter, going back to 1991 when he joined the Pearce’s Mill fire department as a junior firefighter.
From there, he moved on to jobs with the Hope Mills fire department and Cumberland County Emergency Services.

Today, he works in Hoke County as emergency management director and fire marshall.

Marley was one of three commissioners who recently voted to accept an offer from a demolition firm to raze the Parish House and free up the property for other pursuits he considers more viable for the town
to pursue.

His reasons for removing the Parish House, which although it is located in the Hope Mills historic district is not specifically listed in the National Registry of Historic Places as some claim, are rooted in fact, not politics.
“In my opinion, the building is structurally unsafe,’’ Marley said. “It’s a life safety issue.’’

Marley’s reasons to get rid of the Parish House go beyond the problems with the structure. He’s read all the reports that have been done by town staff and by people hired by the town to examine the structure.
“There are reports of mold growing in the building,’’ he said. “That’s a respiratory hazard.’’

The reports also indicate the structure is in danger of collapse.

While he doesn’t think there’s an immediate threat to the town or its people, should the building fall or burn on its own, he called it an eyesore that does nothing to improve the aesthetics of the area where it’s located.
To those who consider the building historic, Marley shares his personal experience as a resident of Hope Mills since his youth. “I’ve never heard of anybody talk about the historic Parish House,’’ he said. “I don’t see the great historical value there.’’

But the price tag for making it usable is high, and Marley thinks the town has more critical projects that need town money than a building with questionable history.

“We’ve got a new police and fire complex that we are trying to get off the ground,’’ he said. “We are looking at that being a $16.5 million project.’’

There’s also a need to use the land where the Parish House is located to help with the parking situation downtown, especially for events at Hope Mills Lake and the long-planned Heritage Park.

Something else Marley said people need to consider is the figures that have been quoted on the restoration of the Parish House are superficial, and will likely go higher should workers get inside the building and look for other problems.
“If they find asbestos or lead paint, they’ve got to mitigate that,’’ he said. “Once you get into a project like that, the price goes up.’’

Marley wouldn’t be surprised if the final number for bringing the Parish House back to life soared closer to $ 1million. “That’s a million dollars the town is taking out of the general fund,’’ he said. “They have to put that money back eventually.’’

The only way to do that, Marley fears, is to increase taxes, and that’s something no elected official wants to discuss. “That conversation hasn’t come up,’’ he said, “but how are you going to recoup that money and be able to carry on the same level of service to the citizens that we are doing now?’’

Marley stressed that he is not against preserving town history, adding that he’s fully committed to saving the Christ Episcopal Church building adjacent to the Parish House. He thinks the town can save the money it would spend on the Parish House renovation and use a smaller portion of it to complete repairs on the church, which is in far better condition.

He thinks it’s a doable option to finish work on the proposed town museum and the church and have both ready for the town’s citizens to use by summer.

“I’m not against town history or preservation,’’ he said. “We’ve just got to think common sense.’’

Marley thinks the negativity about the history of the Parish House has gotten out of hand. He’d like to see people discuss the matter like adults. “I agree it’s an old building,’’ Marley said. “We just can’t sit here and continue to go like we’re going. It’s never going to get anything accomplished.’’

He said that includes efforts some would like the town to pursue with Preservation North Carolina, which would reportedly restore the Parish House without costing the town valuable taxpayer money.

But Marley doesn’t think the entire story is being told. “They take your building and property and market it for you,’’ he said. “They find private investors or companies to come in and they purchase your property.’’

Once that’s done, Marley said the town no longer has direct control over the building or the property. Marley doesn’t want to surrender town use of a piece of premium property in the downtown area.
“All the citizens I’ve talked to, the greater majority if they even know about the Parish House do not care and want to see it gone,’’ Marley said.

“I’m trying to put the dollar figures out there and let people know. That’s my point. If you’re going to say one side of the story, say both sides of the story.’’