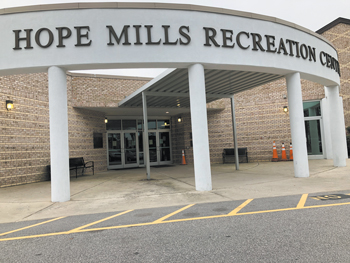 When Stephen Kessinger worked at the Hoke County Parks and Recreation Department, he collaborated with Maxey Dove of the Hope Mills Recreation and Parks Department to hold a season-ending basketball showcase pitting the top youth recreation teams from each county against each other.

After joining the Hope Mills staff less than two years ago, Kessinger said he and Dove agreed the basketball event was something they needed to keep going.

Next month, for the fifth year in a row, the Hoke vs. Hope Mills basketball showdown will continue.

This year’s event will be held March 3-4, a Tuesday and Wednesday, with four games scheduled in the Hope Mills Parks and Recreation Department gymnasium on Rockfish Road.

Kessinger said the idea for having the basketball showdown came from the tradition in recreation baseball and softball where all-star teams that advance into regional and state play are chosen at the end of the season.

There is no playoff format like that for basketball, so Kessinger said the idea was to give the basketball teams a chance to compete beyond the regular season. Unlike the all-star concept in baseball and softball, the teams that take part in the Hoke-Hope Mills games are teams that competed during the year. In the baseball and softball all-star competition, the coaches of the all-star team picFk their squad from players who competed on various league teams during the regular season.

The league champion from four different age brackets in each county advances to the one-game showdown, which has always been held in Hope Mills since the Hoke County recreation department doesn’t have its own gymnasium, Kessinger said.

Both counties follow the same general basketball rules, with a minor difference in the rules involving how players are substituted into the game. For the one-game showdown, those rules are waived and coaches can substitute however they like.

All teams are required to make sure that every player on the team gets to participate in a portion of each quarter of the game, Kessinger said. No admission is charged and all the games are open to the public. Kessinger said the Hope Mills gym seats about 300 people and noted that there’s usually a packed house by the time the second game begins each evening.

When some people have to stand in order to see the game, Kessinger said the recreation department staff encourages them to make sure and not stand too close to the court in order to make sure the teams and the officials have enough room to move safely up and down the court.

The Hope Mills recreation staff provides all the basketballs. All competing players are urged not to bring their own basketballs to the game.

Parking will be available in front of the recreation center and in the various lots close to the Hope Mills Town Hall complex.

Kessinger said the recreation staff was careful to schedule the games on days when there were no other events taking place at Town Hall or the recreation center.

“A lot of parking spaces should be available Tuesday and Wednesday,’’ he said.

Kessinger said the Hoke-Hope Mills games have been enjoyable for players and coaches. “I think they enjoy the competition, getting to play a team they don’t play all year long,’’ he said.

For any questions about the Hoke-Hope Mills basketball showdown, contact the Hope Mills Parks and Recreation Department during normal business hours, Monday through Saturday from 9 a.m. until 9 p.m. or Sunday from 1 p.m. until 9 p.m.