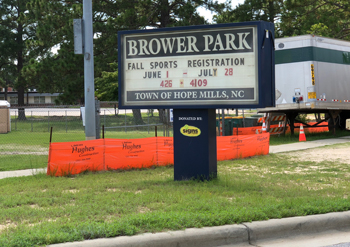 Work is getting close to completion on the temporary headquarters for the Hope Mills Police Department located in the former Ace Hardware Building on
Main Street.

It is estimated the construction will be completed by early to midMarch. Moving from the current police station on Rockfish Road to the new location will begin as soon as construction has ended and is expected to be finished by the end of March.

The temporary police headquarters will be known as Main Street Police Station. The temporary location will be used during construction of the new public safety building for the fire and police departments at the current location on Rockfish Road.

The town has again been notified by the Department of the Army that it will be conducting training exercises in Hope Mills. The Army held similar training events in the town last year.

The Special Warfare 1st Special Forces Command (Airborne) will be holding exercises March 2-27, June 1-26 and Aug. 10-Sept. 4. All Army personnel involved will be in civilian clothes and display military ID. The training should not draw any attention from the public.

Hope Mills will host district baseball and softball tournaments during the upcoming season.

Beginning this fall, the Hope Mills Parks and Recreation Department will add girls’ volleyball for ages 9-17 to the sports program.

The staff is working with the Fayetteville-Cumberland County Parks and Recreation Department and Freedom Christian Academy to coordinate scheduling. Registration for the first season of girls’ volleyball will be held in June.

Because of possible safety issues at the vacant lot where the former Christ Episcopal Church Parish House stood, the Hope Mills Public Works Department has been seeking quotes to install a fence along the parking lot side of the property as well as the rear of the vacant lot.

Prior to the Monday, Feb. 17, meeting of the Board of Commissioners, Adams reported three quotes had been received. After all the quotes have been studied, a decision on who will build the fence is expected soon, with work to install the fence to follow quickly.

In addition to the plans for the fence, the Public Works staff will be grading and seeding the lot when the planting season arrives in the spring.

Parks and Recreation director Lamarco Morrison and Planning and Executive Development Director Chancer McLaughlin will be involved in the process as both have prior experience with landscaping architecture.

Morrison and McLaughlin will work with the town’s Appearance Commission to come up with a basic landscaping design for the vacant lot. The plan is to eventually include the lot in the Heritage Park Master Plan.

If you’ve got an important event coming up in Hope Mills or know of a story you’d like us to pursue, we’d love to hear about it. Please share your Hope Mills news with us via email at hopemills@upandcomingweekly.com.