Common Ground seeks to help charities with its music 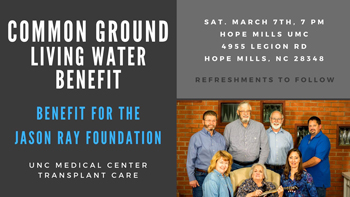 Ronnie Holland knows firsthand what a successful organ transplant can mean to someone in need of a second chance at life.

Five years ago, his daughter had a successful liver transplant at UNC Hospitals in Chapel Hill.

Now, Holland wants to help other people in need of a similar life-saving procedure, or charity for other needs.

After he retired several years ago, he formed a band he named Common Ground. As an outreach ministry of Hope Mills United Methodist Church, Holland’s goal is for his band to help various individuals and charities in need of financial help by holding concerts to raise money.

The first one is scheduled at 7 p.m. Saturday, March 7th, at Hope Mills United Methodist Church at 4955 Legion Road. There is no charge for admission but donations will be accepted after the service.

Holland preferred asking for donations rather than having a set admission price. “We want people to feel led to do what they want to do,’’ he said.

The first concert will benefit the Jason Ray Foundation. The foundation was created in memory of Jason Ray, who wore the Rameses mascot costume for the University of North Carolina before he was killed in a traffic accident.

Ray donated his organs to others, and the foundation was started to raise money for the UNC Hospital Comprehensive Transplant Center Foundation.

The group will perform a variety of music during the event, Holland said. Selections will include gospel, 60’s music, beach music, bluegrass and blues.Light refreshments will be served after the concert.

Holland said the sanctuary of the Hope Mills church will hold about 200. If the sanctuary is full, he said they can stream video of the performance into the church family life center. “I hope it gets too big and we have to go somewhere else,’’ he said.

The event is called the Living Water Benefit, which is illustrated in an original painting by one of the group’s members, Linda Currie.
It shows a waterfall flowing underneath a cross.

Holland said the picture symbolizes that Jesus Christ died to free everyone from sin. Water is included because everyone needs water to live, and water is used to baptize believers.

He sees the transplant as being similar since it gives the recipient a new life.

If anyone has questions or would like to make a donation, they can contact Holland at 910-624-4166 or by email at ronnieholland51@gmail.com.