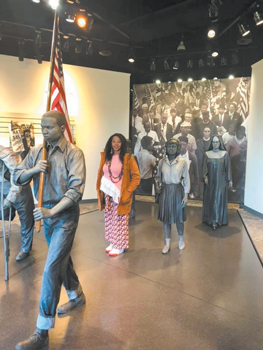 Dr. Kenjuana McCray made history when she became the first African-American woman elected to the Hope Mills Board of Commissioners last November.

But it was a page from national history that helped inspire her to run for office, and make a promise to herself to keep that history alive in her own memories.

Recently McCray made her second consecutive trip to Selma, Alabama, to revisit some of the most prominent sites connected with the American Civil Rights movement and the passage of the landmark 1965 Voting Rights Act. The act, which was signed into law by President Lyndon Johnson, prohibited racial discrimination in voting.

The event McCray participated in is called the Bridge Crossing Jubilee. It marked the 55th anniversary of Civil Rights marchers crossing the Edmund Pettus Bridge during a march in support of voting rights in 1965. During that crossing, now referred to as “Bloody Sunday," many of the marchers were brutally beaten by law enforcement officers.
McCray not only visited the bridge, but also museums and other historic sites in the Selma, Tuskegee and Montgomery, Alabama, areas during her visit.

She was most moved by the personal accounts of people who were invited back to speak who took part in the marches 55 years ago. “They bring in people that were foot soldiers in the movement,’’ McCray said. “You get to hear one-on-one stories about actual events that happened, things you don’t read in the history books.’’

She also attended a special event at Tabernacle Baptist Church in Selma, the site of a famous meeting held by the late Dr. Martin Luther King Jr. to conduct a planning session for the 1965 march.

McCray said that after she attended the conference for the first time in 2019, she made up her mind to again run for public office in Hope Mills. “It was one of the things that helped me make my decision I was going to run again,’’ she said. She noted that people of different races were involved in that march 55 years ago, and that people of different races lost their lives in the struggle for civil rights in this country.

One important lesson she has learned from her visits to the Selma area is the power of people working together for a common cause. She noted names like King and Congressman John Lewis, along with many others who were at the forefront of the Civil Rights movement.

“It was a collective group of people who helped do this,’’ she said. “It’s that whole idea of the power of what you can do if you work together and do things together.
“There were a lot of people who worked together to make this thing happen.’’